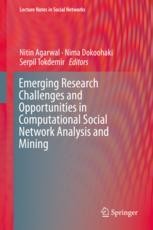 The contributors in this book share, exchange, and develop new concepts, ideas, principles, and methodologies in order to advance and deepen our understanding of social networks in the new generation of Information and Communication Technologies (ICT) enabled by Web 2.0, also referred to as social media, to help policy-making. This interdisciplinary work provides a platform for researchers, practitioners, and graduate students from sociology, behavioral science, computer science, psychology, cultural studies, information systems, operations research and communication to share, exchange, learn, and develop new concepts, ideas, principles, and methodologies.

Emerging Research Challenges and Opportunities in Computational Social Network Analysis and Mining will be of interest to researchers, practitioners, and graduate students from the various disciplines listed above. The text facilitates the dissemination of investigations of the dynamics and structure of web based social networks. The book can be used as a reference text for advanced courses on Social Network Analysis, Sociology, Communication, Organization Theory, Cyber-anthropology, Cyber-diplomacy, and Information Technology and Justice.

Dr. Nitin Agarwal is a Distinguished Professor and Maulden-Entergy Endowed Chair of Information Science at the University of Arkansas at Little Rock.  He is also the Director of the Collaboratorium for Social Media and Online Behavioral Studies (COSMOS).  His research interests include social computing, deviant behavior modeling, mis/disinformation dissemination, computational propaganda analysis, group dynamics, social-cyber forensics, data mining, artificial intelligence, and privacy.  His research has been supported by the U.S. National Science Foundation (NSF), the Army Research Office (ARO), the Office of Naval Research (ONR), the Air Force Research Laboratory (AFRL), the Defense Advanced Research Projects Agency (DARPA), and the Department of Homeland Security (DHS) with a total funding of over $10 million.  He is a fellow of the prestigious International Academy, Research and Industry Association (IARIA).  Dr. Agarwal received his doctorate at the Arizona State University in 2009 with outstanding dissertation recognition and was recognized as top 20 in their 20s by Arkansas Business.  He has published over 100 peer-reviewed articles with several best paper awards and has been recognized as an expert in social, cultural, and behavioral modeling by several international news media organizations.

Dr. Nima Dokoohaki is a senior data scientist. He is currently affiliated with Intellectera, a data science research & development company where together with co-founders he develops and delivers solutions for consumer behavior modeling and analytics. In addition, he maintains collaboration with a research group at Software and Computer Systems department of Royal Institute of Technology (KTH) as an external advisor. His research interests include trust & privacy, applied machine learning, social computing and recommendation systems. He received his Ph.D. in information and communications technology (ICT) in 2013. The main theme of his research was how to understand and leverage the notion of social trust so online service providers can deliver more transparent and privacy preserving analytical services to their end users. His research has been backed by European projects funded from EU FP7 and Horizon 2020 framework programs, as well as distinguished public funding organizations including Swedish Research Council and Vinnova. In 2014, he received a distinguished fellowship from the European Research Consortium for Informatics and Mathematics (ERCIM). He has published over 30 peer-reviewed articles. In addition to two best paper awards, he has been interviewed for his visible research and his lecture has been broadcasted on Swedish public television. An ACM professional member, he is a certified reviewer for prestigious Knowledge and Information Systems (KAIS) as well as occasional reviewer for recognized international venues and journals.

Dr. Serpil Tokdemir is a research project analyst at the Office of Medicaid Inspector General (OMIG), Little Rock, Arkansas, USA. Dr. Tokdemir has a joint affiliation with the Collaboratorium for Social Media and Online Behavioral Studies (COSMOS) at UALR as research associate. Her work involves extracting raw data from Fraud and Abuse Detection System (FADS), cluster analysis, anomaly/outlier detection, predictive analysis and decision support systems, data visualization, content mining, and network analysis. Dr. Tokdemir obtained her PhD from UALR in 2015 with support from U.S. National Science Foundation (NSF). Bringing together the computational modeling and social science theories, her dissertation explored the role of social media in coordinating online collective action in the context of Saudi Arabian Women’s campaigns for right to gender equality. She has published several articles in this domain and won the most published student distinction by Engineering and Information Technology college at UALR. She obtained her Bachelor in Science in Computer Science from Marmara University, Istanbul, Turkey in 2003. She completed her Master in Science (MS) in Computer Science from Georgia State University in 2006, Atlanta, Georgia, USA.