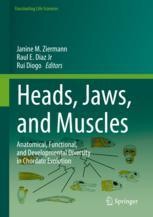 The vertebrate head is the most complex part of the animal body and its diversity in nature reflects a variety of life styles, feeding modes, and ecological adaptations. This book will take you on a journey to discover the origin and diversification of the head, which evolved from a seemingly headless chordate ancestor. Despite their structural diversity, heads develop in a highly conserved fashion in embryos. Major sensory organs like the eyes, ears, nose, and brain develop in close association with surrounding tissues such as bones, cartilages, muscles, nerves, and blood vessels. Ultimately, this integrated unit of tissues gives rise to the complex functionality of the musculoskeletal system as a result of sensory and neural feedback, most notably in the use of the vertebrate jaws, a major vertebrate innovation only lacking in hagfishes and lampreys. The cranium subsequently further diversified during the major transition from fishes living in an aquatic environment to tetrapods living mostly on land. In this book, experts will join forces to integrate, for the first time, state-of-the-art knowledge on the anatomy, development, function, diversity, and evolution of the head and jaws and their muscles within all major groups of extant vertebrates. Considerations about and comparisons with fossil taxa, including emblematic groups such as the dinosaurs, are also provided in this landmark book, which will be a leading reference for many years to come.

Janine Ziermann is an Assistant Professor at the Howard University College of Medicine in Washington, DC. She received her PhD in Germany studying the evolution and development of head muscles in larval amphibians. This was followed by a postdoc in the Netherlands and one in the USA to further study vertebrates. Her research focuses on the evolution and development of the cardiopharyngeal field, a field that gives rise to head, neck, and heart musculature. Additionally, she aims to use the knowledge from her research to understand the pathology of congenital defects, which often affect both head and heart structures. She won several awards, including the ‘American Association of Anatomists (AAA) and the Keith and Marion Moore Young Anatomist’s Publication Award’ (YAPA). Furthermore, she single-authored or co-authored more than 30 papers in top journals such as Nature, Biological Reviews, books, book chapters, and commentaries.
Raul E. Diaz, Jr. is an Assistant Professor at Southeastern Louisiana University and a Research Associate at the Natural History Museum of Los Angeles County. He received his BS from the University of California at Berkeley and his MA from the University of Kansas where he studied frog skeletal development through metamorphosis. His PhD was completed through the University of Kansas Medical Center though his research was conducted at the Stowers Institute for Medical Research where he developed the veiled chameleon as a useful model for studying squamates reptile embryonic development. His research has meandered through his academic career from tropical field biology and systematics to anatomy and cell biology, development and genomics of reptiles and amphibians and now combines all these disciplines (as well as modern techniques in microscopy and imaging) to bridge the disciplines of comparative morphology, development and biomedical research.
Rui Diogo, Associate Professor at the Howard University College of Medicine, was one of the youngest researchers to be nominated as Fellow of the American Association of Anatomists, and won several prestigious awards, being the only researcher selected for first/second places for best article of the year in the top anatomical journal, two times in just three years (2013/2015). He is single-author or co-author of more than 100 papers in top journals such as Nature, and of numerous book chapters. Furthermore, he is the co-editor of five books and the sole or first author of thirteen books covering subjects as diverse as fish evolution, chordate development, human medicine and pathology, and the links between evolution and behavioral ecology. One of these books was adopted at medical schools worldwide, "Learning and understanding human anatomy and pathology: an evolutionary and developmental guide for medical students", and another one has been often listed as one of the best ten books on evolutionary biology in 2017, "Evolution driven by organismal behavior: a unifying view of life, function, form, mismatches, and trends".

Show all
Reviews
“The clear sound scientific data and the expertise of the authors make this book surprisingly amusing, considering that many complex scientific issues are considered here. As this book comfortably rides between popularization and science, it is appropriate not only for scientist working in the field, but also for graduate and postgraduate students seeking to improve basic knowledge on the issues.” (Virginia Abdala, Mastozoología Neotropical, Vol. 26 (1), 2019)
“This edited volume explores the anatomy, development, function, and evolution of the head, skeleton, and musculature of chordates. … it is an excellent, up-to-date reference and resource for advanced students and professional scholars of vertebrate anatomy and paleontology. Summing Up: Highly recommended. Graduate students and researchers.” (T. Harrison, Choice, Vol. 56 (12), August, 2019)