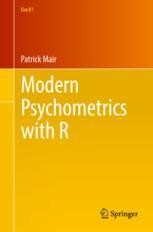 This textbook describes the broadening methodology spectrum of psychological measurement in order to meet the statistical needs of a modern psychologist. The way statistics is used, and maybe even perceived, in psychology has drastically changed over the last few years; computationally as well as methodologically.  R has taken the field of psychology by storm, to the point that it can now safely be considered the lingua franca for statistical data analysis in psychology. The goal of this book is to give the reader a starting point when analyzing data using a particular method, including advanced versions, and to hopefully motivate him or her to delve deeper into additional literature on the method.

Beginning with one of the oldest psychometric model formulations, the true score model, Mair devotes the early chapters to exploring confirmatory factor analysis, modern test theory, and a sequence of multivariate exploratory method. Subsequent chapters present special techniques useful for modern psychological applications including correlation networks, sophisticated parametric clustering techniques, longitudinal measurements on a single participant, and functional magnetic resonance imaging (fMRI) data. In addition to using real-life data sets to demonstrate each method, the book also reports each method in three parts-- first describing when and why to apply it, then how to compute the method in R, and finally how to present, visualize, and interpret the results. Requiring a basic knowledge of statistical methods and R software, but written in a casual tone, this text is ideal for graduate students in psychology.

Relevant courses include methods of scaling, latent variable modeling, psychometrics for graduate students in Psychology, and multivariate methods in the social sciences.

Patrick Mair is Senior Lecturer in Statistics in the Department of Psychology at Harvard University. His research focuses on computational and applied statistics with special emphasis on psychometric methods, such as latent variable models and multivariate exploratory techniques. Mair holds a doctorate in Statistics and a master’s degree in Psychology from the University of Vienna. He was also a Research Fellow at the Department of Statistics at the University of California, Los Angeles.

“The book gives an exhaustive overview of statistical methods that may be used when analyzing results of research in psychology. Main accent is on the use of R software during analysis of data. The main goal of the book is to provide the reader with main methods used for data analysis and how those methods may be executed using software package R.” (Jonas Šiaulys, zbMath 1414.62006, 2019)