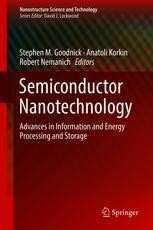 Advances in Information and Energy Processing and Storage

This book presents research dedicated to solving scientific and technological problems in many areas of electronics, photonics and renewable energy. Energy and information are interconnected and are essential elements for the development of human society. Transmission, processing and storage of information requires energy consumption, while the efficient use and access to new energy sources requires new information (ideas and expertise) and the design of novel systems such as photovoltaic devices, fuel cells and batteries. Semiconductor physics creates the knowledge base for the development of information (computers, cell phones, etc.) and energy (photovoltaic) technologies. The exchange of ideas and expertise between these two technologies is critical and expands beyond semiconductors. Continued progress in information and renewable energy technologies requires miniaturization of devices and reduction of costs, energy and material consumption. The latest generation of electronic devices is now approaching nanometer scale dimensions, new materials are being introduced into electronics manufacturing at an unprecedented rate, and alternative technologies to mainstream CMOS are evolving. Nanotechnology is widely accepted as a source of potential solutions in securing future progress for information and energy technologies.
Semiconductor Nanotechnology features chapters that cover the following areas: atomic scale materials design, bio- and molecular electronics, high frequency electronics, fabrication of nanodevices, magnetic materials and spintronics, materials and processes for integrated and subwave optoelectronics, nanoCMOS, new materials for FETs and other devices, nanoelectronics system architecture, nano optics and lasers, non-silicon materials and devices, chemical and biosensors, quantum effects in devices, nano science and technology applications in the development of novel solar energy devices, and fuel cells and batteries.

Stephen M. Goodnick received his Ph.D. degrees in electrical engineering from Colorado State University, Fort Collins, in 1983, respectively. He was an Alexander von Humboldt Fellow with the Technical University of Munich, Munich, Germany, and the University of Modena, Modena, Italy, in 1985 and 1986, respectively. He served as Chair and Professor of Electrical Engineering with Arizona State University, Tempe, from 1996 to 2005. He served as Associate Vice President for Research for Arizona State University from 2006-2008, and presently serves as Deputy Director of ASU Lightworks, and is Hans Fischer Senior Fellow with the Institute for Advanced Studies at the Technical University of Munich.  Professionally, he served as President (2012-2013) of the IEEE Nanotechnology Council, and served as President of IEEE Eta Kappa Nu Electrical and Computer Engineering Honor Society Board of Governors, 2011-2012.  Some of his main research contributions include analysis of surface roughness at the Si/SiO2  interface, Monte Carlo simulation of ultrafast carrier relaxation in quantum confined systems, global modeling of high frequency and energy conversion devices, full-band simulation of semiconductor devices, transport in nanostructures, and fabrication and characterization of nanoscale semiconductor devices.  He has published over 400 journal articles, books, book chapters, and conference proceeding, and is a Fellow of IEEE (2004) for contributions to carrier transport fundamentals and semiconductor devices.

Anatoli Korkin: Anatoli Korkin is an adjunct professor at Arizona State University and president of consulting company Nano and Giga Solutions. Dr. Korkin got his Master Degree in chemistry from Mendeleev University of Chemical Technology of Russia and his PhD in physics from Lomonosov Moscow State University. Dr. Korkin has an extensive experience in computational and physical chemistry and industrial research in process & material design at atomic and nano scale. He has published over 100 refereed journal articles and edited several books and special journal issues. Prior starting his career as an entrepreneur in 2004 Dr. Korkin worked for Motorola as a Senior Scientist in R & D division. He was a researcher & visiting scientist in world-class academic institutions, including: Russian (Soviet Union) Academy of Sciences, University of Erlangen-Nurnberg, Max-Planck Institute of Radiochemistry, Dalhousie Uiniversity, University of Florida, Philipps University Marburg, Tyndall National Institute and University of Tokyo. Dr. Korkin’s entrepreneurial activities include organizing conferences and seminars, consulting in technology commercialization, education, science and executive management for start-up companies, organization and management of professional networks.

Robert J. Nemanich is Regents’ Professor, in the Department of Physics, Arizona State University. He completed BS and MS degrees in physics at Northern Illinois University, and a Ph.D. at the University of Chicago. In 1976 he joined the Xerox Palo Alto Research Center (PARC), where he was a project leader in the General Sciences Laboratory. In 1986 he moved to North Carolina State University, and was recipient of the NC State Alumni Association’s Outstanding Research Award (1994), the Distinguished Graduate Professorship (2001), and served as the acting Associate Dean of Research. He joined ASU in 2006, served as Chair of the Department of Physics though June 2013 and was appointed Regents’ Professor in 2017. Nemanich has a long-standing involvement with the Materials Research Society and has served as MRS President and President of the International Union of Materials Research Societies (IUMRS). He is a Fellow of the American Physical Society and has served as Chair of the executive committee of the Division of Materials Physics. Nemanich was the Editor-in-Chief of the research journal Diamond and Related Materials, and served on the Editorial Board of the Journal of Applied Physics and Applied Physics Letters. His research has been primarily in the area of electronic materials, and has focused on growth, processing and characterization of surfaces, interfaces, thin films and nanostructures. He has employed scanning probe techniques and photo electron emission microscopy (PEEM) to explore the dynamics of nanostructures on surfaces. His research has centered on carbon-based materials, Si based materials, wide band gap nitrides and polar oxides. Most recently he has developed diamond films for energy and electronics applications, and he has employed atomic layer deposition (ALD) for electronic and photocatalytic processes.  He has co-authored four patents and over 400 scientific publications. To date, over 75 graduate students, ten postdoctoral colleagues, eight diploma students from Europe, and over 50 undergraduates have been involved with research in his laboratory. His research has always emphasized interdisciplinary collaborative approaches.