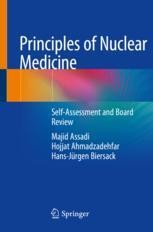 Self-Assessment and Board Review

This book is the ideal study tool for all who are preparing for national or international nuclear medicine exams and in addition represents a truly outstanding quick review resource. More than 4200 questions, with comprehensive answers, are presented in order to enable readers to assess their knowledge and identify areas of weakness that require further self-study. Informative subchapters permit exploration of specific topics in greater depth, and practice tests will familiarize readers with the process of taking multiple-choice examinations. The book covers the entire spectrum of nuclear medicine, from basic science to clinical applications for diagnosis and treatment. Individual sections focus on oncology, bone and joint disorders, gastrointestinal disorders, acute care, cardiology, neurology and psychiatry, and renal disease. Principles of Nuclear Medicine is highly recommended for those who are taking nuclear medicine or radiology board examinations or recertifying their subspecialty certificate (CAQ) in nuclear medicine. More generally, it will be an asset for all trainees and practitioners of nuclear medicine and radiology.

Show all
About the authors
Majid Assadi is a Professor in Nuclear Medicine, Chairman of the Department of Nuclear Medicine and also Director of the Molecular Imaging Research center at Bushehr University of Medical Sciences. He joined the Department of Radiology at Stanford University in 2011 and Harvard University (MGH) in 2014 as a visiting professor. He serves on the scientific advisory board of several national and international societies such as American Society of Nuclear Cardiology (ASNC) and The National Academy of Medical Sciences. He was promoted to professor in medical education at Bushehr University of Medical Sciences at the age of 36 years and recently received the highest award in research and technology from the Iranian president. He received international research awards from the American Society of Rhinology in 2005 and the World Federation of Nuclear Medicine and Biology in 2006. He has also served on the editorial boards of leading academic journals. He has published more than 200 articles and six books and is a regular speaker at international and national congresses. He has mentored over 100 students from over a dozen disciplines.

Hans-Jürgen Biersack was Professor of Nuclear Medicine at the University of Bonn for more than 30 years and is now Emeritus Professor. He has many years of experience as Director of the Klinik und Poliklinik für Nuklearmedizin in Bonn. In a long and distinguished career, he has served as President of both the German Society of Nuclear Medicine (1992–4) and the World Federation of Nuclear Medicine and Biology (1994–8). He has received a number of awards, including the Georg von Hevesy Medal (2000), and was Badgastein Lecturer in 1988, Dr. Luis Guerrero Lecturer in 1994, and L. Rao and Shanta Chervu Lecturer in 2000. He holds the Order of Merit from the Federal Republic of Germany and the Sign of Honor from the Red Cross. Professor Biersack has sat on the editorial boards of numerous leading journals and has acted as editor for several journals. He is the author of 440 papers cited in PubMed/MEDLINE as well as 310 book chapters and 35 books. He continues to work at Betaclinic Bonn.