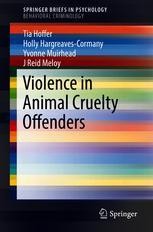 This book presents results from a BAU study including 259 active, animal cruelty cases.  In addition, there were a total of 495 animal victims including numerous species, but dogs (64%) were the predominant animal victim.  The offenders were all male, ranging in age from 17-years old to 82 years old (mean age of 34 years) and 73.44% had arrests for various other crimes prior to and/or following the instant animal cruelty arrest. Sixty percent of the offenders had been arrested for interpersonal violence prior, concurrent and/or post the instant active animal cruelty incident.

Tia A. Hoffer has a doctoral degree in Multicultural Community Clinical Psychology and prior to her work with the FBI, she conducted psychological assessments, individual, group and family psychotherapy.  SA Hoffer has been with the FBI since 1998 working crimes against children investigations in Los Angeles, California.  She was promoted to Supervisory Special agent in 2006 and was assigned to the Behavioral Analysis Unit, Crimes Against Children Unit.  The unit specializes in missing children/child abductions, child homicides, sexual exploitation and victimization of children.  SA Hoffer provided operational support through case consultations and onsite deployments to federal, state, local and international law enforcement agencies.

Currently, SA Hoffer works Counterterrorism and threat matters in the FBI Honolulu Division and is also a Crisis Negotiator for the FBI.  SA Hoffer provides training to law enforcement, mental health professionals, victim support groups and court entities.  She was the Principal Investigator on a number of research projects, including Suicide Among Child Sex Offenders, the General Assessment Questionnaire Validation project, the Sexual Exploitation of Children Study and is currently completing the study focusing on animal cruelty, interpersonal violence and affective/predatory violence.

Holly Hargreaves-Cormany Ph.D., M.A., M.A., L.C.P.C., N.C.C.
Holly Hargreaves-Cormany is an Assistant Professor of Forensic and Legal Psychology at Marymount University. She has previously served as a Research Fellow with the Oak Ridge Institute for Science and Education. She is a Licensed Clinical Professional Counselor as well as a Nationally Certified Counselor with a Ph.D. in Counseling and Masters Degrees in Forensic Psychology and Community Counseling. She has published and conducted research studies on the sex trafficking of juveniles, the association between animal cruelty and interpersonal violence, humane education and the benefits of therapeutic riding programs and has presented such research at national and international conferences. She also conducts research on issues related to the exploitation of juveniles and served as the Co-Chair of the Animals and Interpersonal Violence Research Interest Group in the American Psychological Association’s Section on Human-Animal Interaction: Research & Practice, of Division 17- Counseling Psychology. Dr. Hargreaves-Cormany uses her clinical experience practicing as a Counselor in private practice and in community counseling settings to inform her research and teaching.

Yvonne Muirhead has 12 years of federal law enforcement experience, and has recently joined Bexar County Precinct 4 Constable’s office as a Deputy Constable in San Antonio, Texas.  She holds a Master’s Degree in Statistics and a Bachelor‘s Degree in Mathematics from the University of Texas at San Antonio.  Expert in statistical modeling, operational research support and coordination, leading and managing groups of professional researchers, law enforcement, and administrative support personnel.  Experienced in Joint interaction with multiple international, federal, state, and municipal organizations including DoD, DOE, US Marshals, and US Secret Service. Currently serves as a Staff Operations Specialist for a Cyber Squad at the Federal Bureau of Investigation (FBI) – San Antonio Division.  Responsible for providing analytic support to FBI investigations regarding domestic and international cyber threats.  Previously served as the Research Coordinator for the FBI’s Behavioral Analysis Unit (BAU) and successfully managed programs for applied social science research projects in support of the BAU.

Dr. Meloy is a board-certified forensic psychologist (ABPP) and consults on criminal and civil cases throughout the U.S. and Europe. He is a clinical professor of psychiatry at the University of California, San Diego, School of Medicine, and a faculty member of the San Diego Psychoanalytic Center. He is a fellow of the American Academy of Forensic Sciences and is past president of the American Academy of Forensic Psychology. He has received a number of awards and honors, and was the Yochelson Visiting Scholar at Yale University in March, 2015.  Dr. Meloy has authored or co-authored over two hundred papers published in peer-reviewed psychiatric and psychological journals, and has authored, co-authored or edited eleven books. He has been consulting, researching and writing about personality disorder, psychopathy, stalking, narcissism, criminality, mental disorder, and targeted violence for the past thirty years.  His first book, The Psychopathic Mind (Aronson, 1988), was an integration of the biological and psychodynamic understanding of psychopathy.  His co-edited book with Drs. Hoffmann and Sheridan, Stalking, Threatening and Attacking Public Figures (Oxford University Press, 2008), led to a commissioned study for the National Academy of Sciences on threats toward public figures published in 2011 (www.nap.edu).  His most recent book with Dr. Hoffmann is the International Handbook of Threat Assessment (Oxford University Press, 2014).  Dr. Stephen White and he created the WAVR-21 V3 and Threat Assessment App  (www.wavr21.com), a structured professional judgment instrument for targeted workplace violence. Dr. Meloy has been a consultant to the FBI, Quantico, for the past seventeen years, and is the originator and developer of the TRAP-18 (Terrorist Radicalization Assessment Protocol, www.gifrinc.com).  He was a member of the Fixated Research Group for the United Kingdom’s Home Office concerning threats to the Royal Family and British political figures, and is a consulting member of Work Trauma Services, Inc., headquartered in San Francisco, Team Psychology and Security in Darmstadt, Germany, and L&S Threat Management in South Africa. He is also a senior editor of the Journal of Threat Assessment and Management.
Show all