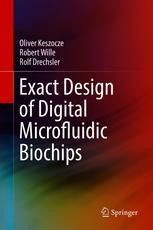 This book presents exact, that is minimal, solutions to individual steps in the design process for Digital Microfluidic Biochips (DMFBs), as well as a one-pass approach that combines all these  steps in a single process. All of the approaches discussed are based on a formal model that can easily be extended to cope with further design problems.  In addition to the exact methods, heuristic approaches are provided and the complexity classes of various design problems are determined.

Robert Wille's expertise is in the development of design technologies for various application areas – with a particular focus on the design, verification, and test of circuits and systems. He considers thereby conventional as well as emerging computing technologies such as quantum computation, reversible circuits, or microfluidic biochips. Since 2007, Robert Wille published more than 150 journal and conference papers in this area (including top-notch venues such as DAC, DATE, ICCAD, ASP-DAC, MoDELS, or TCAD) and was repeatedly awarded (e.g. with a Best Paper Award at the International Conference on Computer-Aided Design in 2013 and the Forum on Specification and Design Languages in 2010).

Robert Wille served as Guest Editor for the ACM Journal on Emerging Technologies in Computing Systems (JETC), Springer's Lecture Notes in Computer Science (LNCS), and the Journal for Multiple-Valued Logic and Soft Computing (MVLSC). Additionally, he was PC Chair at the Forum on Description Languages, the Conference on Reversible Computation, and the International Symposium on Multiple-Valued Logic (ISMVL) as well as served as Subcommittee Chair at the Asia and South Pacific Design Automation Conference (ASP-DAC), was in program committees of numerous conferences such as ASP-DAC, DAC, ICCAD, ISMVL, etc., and organized several conferences, tutorials, Dagstuhl seminars, workshops, and special sessions. Rolf Drechsler is head of Cyber-Physical Systems department at the German Research Center for Artificial Intelligence (DFKI) since 2011. Furthermore, he is a Full Professor at the Institute of Computer Science, University of Bremen, since 2001. Before, he worked for the Corporate Technology Department of Siemens AG, and was with the Institute of Computer Science, Albert-Ludwig University of Freiburg/Breisgau, Germany. Rolf Drechsler received the Diploma and Dr. Phil. Nat. degrees in computer science from the Goethe-University in Frankfurt/Main, Germany, in 1992 and, respectively, 1995. Rolf Drechsler focusses in his research at DFKI and in the Group for Computer Architecture, which he is heading at the Institute of Computer Science of the University of Bremen, on the development and design of data structures and algorithms with an emphasis on circuit and system design.
Show all