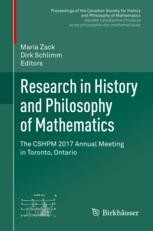 Research in History and Philosophy of Mathematics

This volume contains thirteen papers that were presented at the 2017 Annual Meeting of the Canadian Society for History and Philosophy of Mathematics/Société canadienne d’histoire et de philosophie des mathématiques, which was held at Ryerson University in Toronto. It showcases rigorously reviewed modern scholarship on an interesting variety of topics in the history and philosophy of mathematics from Ancient Greece to the twentieth century.

A series of chapters all set in the eighteenth century consider topics such as John Marsh’s techniques for the computation of decimal fractions, Euler’s efforts to compute the surface area of scalene cones, a little-known work by John Playfair on the practical aspects of mathematics, and Monge’s use of descriptive geometry.

After a brief stop in the nineteenth century to consider the culture of research mathematics in 1860s Prussia, the book moves into the twentieth century with an examination of the historical context within which the Axiom of Choice was developed and a paper discussing Anatoly Vlasov’s adaptation of the Boltzmann equation to ionized gases.

The remaining chapters deal with the philosophy of twentieth-century mathematics through topics such as an historically informed discussion of finitism and its limits; a reexamination of Mary Leng’s defenses of mathematical fictionalism through an alternative, anti-realist approach to mathematics; and a look at the reasons that mathematicians select specific problems to pursue.

Written by leading scholars in the field, these papers are accessible to not only mathematicians and students of the history and philosophy of mathematics, but also anyone with a general interest in mathematics.