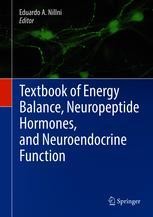 This textbook presents for the first time a comprehensive body of the latest knowledge in the field of neuropeptides and their action on energy balance. It contains a detailed and comprehensive account of the specific hypothalamic peptides in regards to their roles in energy balance, food intake control and co-morbidities, to better understand the patho-physiology of obesity.
The textbook includes an examination the history of the evolution of human society from a thin to the obese phenotype and, within that context, how modern society habits and industrial food production did not respect the evolutionary trait resulting in changes in the energy balance set point. It provides a novel conceptualization of the problem of obesity when considering the biochemistry of peptide hormones and entertaining novel ideas on multiple approaches to the problems of energy balance, as well as demonstrates and explains why alterations in pro-hormone processing are paramount to understand metabolic disease.
This text is excellent material for teaching graduate and medical school courses, as well as a valuable resource for researchers in biochemistry, cell, and molecular biology, neuroscientists, physician endocrinologists, and nutritionists.

Dr. Nillni is an Emeritus Professor in the Department of Medicine and the Department of Molecular Biology, Cell Biology & Biochemistry at Brown University. He has been a member of the Brown faculty since 1989. He has a master's degree in Biological Sciences from the University of Buenos Aires, Argentina, and a Ph.D. degree from the Hadassah Medical School, The Hebrew University of Jerusalem, Israel, where he studied the Biochemistry of Parasitic Protozoa. Dr. Nillni completed his post-doctoral fellowship in membrane biology of parasitic protozoa at Tufts-New England Medical Center in Boston, and he then became a member of the faculty in 1984. He subsequently shifted his research to the field of Neuroendocrinology and Cell Biology when he moved to Brown University. Since then he has studied the role of neuropeptide hormones and nutrient sensors in the hypothalamus interacting with the adiposite hormone leptin and other vital components of the regulatory system controlling food intake energy homeostasis.

Dr. Nillni has made substantial contributions to the neurobiology of neuropeptide hormones controlling energy balance. His laboratory has produced seminal work in demonstrating that the biosynthesis of neuropeptide hormones from their pro-hormones is nutritionally regulated. These nutritional changes affect the activity of the Pro-hormone Convertases 1 and 2 (PC1 and PC2) essential in the maturation of all pro-hormones. Most of his studies focused on pro-Thyrotropin Releasing Hormone (pro-TRH) and pro-opiomelanocortin (POMC) polypeptides directly involved in energy homeostasis. He has described how different hormones and neurotransmitters including leptin, α-MSH, Norepinephrine (NE), and thyroid hormone regulate pro-TRH at transcriptional, protein biosynthesis and secretion levels in the hypothalamus. The universal finding derived from these studies demonstrated that besides affecting TRH transcription and pro-TRH biosynthesis, leptin, NE, α-MSH, and thyroid hormone also affect the maturation of PC1 and PC2. This tightly regulated mechanism to produce biologically active peptides turns out to be true for most peptide hormones produced in the hypothalamus. A breakthrough study from his laboratory in the biology of leptin was that aside from regulating peptide hormone expression, leptin also controls pro-hormone processing by regulating PC1 and PC2. This novel concept was introduced in 2004 to the obesity field, which provided the basis for many studies conducted today in other laboratories. His laboratory in collaboration with his colleagues at Harvard University also demonstrated for the first time that leptin regulates the TRH and POMC genes expression through activation of the STAT3 signaling pathway. His laboratory showed for the first time that the Diacetyl enzyme Sirt1 present in the hypothalamus operates as a nutrient sensor involved in the regulation of food intake. He also revealed that endoplasmic reticulum stress, developed in the hypothalamus of the obese, prevents the proper protein folding and processing of POMC, which is an essential anorectic precursor to maintain body weight in check.

Through his active 26 years at Brown, Dr. Nillni trained more than 50 undergraduate students in their independent study class. He has mentored summer interns, numerous graduate students, and postdoctoral fellows. He was an executive member of the Molecular Biology, Cell Biology & Biochemistry PhD graduate program and also a member of the PhD and MD/PhD admission committees. In addition to undergraduate courses, Dr. Nillni taught for 18 years a graduate class on protein processing and trafficking, a subject on cell biology that did not exist at the Molecular and Cellular Biology graduate program. Dr. Nillni has published more than 75 manuscripts including reviews and chapter books. He was on the editorial board of various prestigious scientific journals, and has been a reviewer for nineteen journals including Nature, Cell, Journal of Biological Chemistry and Journal of Clinical Investigation. He was also a member of several national and international review committees including the National Science Foundation and the National Institutes of Health Study Sections for more than 20 years, an activity that continues until today.

“This is a comprehensive review of distinct hypothalamic neuropeptide circuitries that regulate appetite and energy homeostasis by integrating peptide hormone signals of nutritional status from the periphery. … It is well recognized that peptide hormones play a key role in the control of food intake and energy expenditure, and therefore providing an up-to-date review of these systems for the scientific community is a valuable objective.” (Jarrad M Scarlett, Doody's Book Reviews, November, 2018)