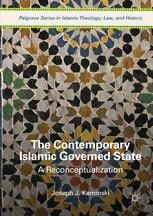 This book offers a normative reconceptualization of a modern Islamic governed state. First, Joseph Kaminski surveys the historical context of the trajectory of Islamic thought, and offers a unique discursive framework for reconceptualizing an Islamic governed state that rejects secular Enlightenment liberalism and instead is heavily grounded in Ancient Greek ideals of politics and political leadership.  Despite heavily borrowing from Greek thought, the model offered remains firmly rooted in a Shari’ah-based, discursive ontological framework.  The volume explores topics of bureaucracy, law, democracy, women in politics, and economic justice. Further, this volume presents case studies from Turkey, Egypt, Tunisia, and Malaysia, and utilizes the presented theoretical framework as a lens for analysis.

Joseph J. Kaminski is an Assistant Professor at the International University of Sarajevo in Bosnia and Herzegovina.  His research interests are at the intersection of political theory and international relations/comparative politics with a regional focus on the Muslim world.

“In The Contemporary Islamic Governed State, Kaminski places his focus primarily upon the intersection of politics and Islam through the lens of discourse analysis. Invoking such essential western scholars as Ernesto Laclau and Michel Foucault, Kaminski acknowledges and affirms the importance of discourse and its concomitant relationship to multiple nodal points of power in developing a conceptual framework for a viable political model.” (Saeed A. Khan, Politics and Religion, Vol. 12 (1), March, 2019)
“A comprehensive summary of the discourse on Islamic political theory in relation to important Western political philosophical figures … . Kaminski’s book is a thematically wide-ranging project that engages with many fundamental legal-philosophical questions and how they can be evaluated in relation to more specific, concrete socio-political realities in many parts of the Muslim world today. … this makes it all the more valuable for readers with a more advanced understanding of the topic of Islam and its relation to politics.” (Translated from German, KISMET Online, September, 2018)
“Joseph Kaminski’s broad background in philosophy and political science allows him to approach his subject with genuine wisdom and a sense of command. Few readers, I predict, will complete this book without having gained significant new insights into the currently vital issues that are at its core.” (William L. McBride, Purdue University, USA)

“An innovative and insightful study. Kaminski seeks to rethink ‘Islamic governance’ in terms of a public ‘discourse’ attentive to Islamic history, theology and jurisprudence and to ancient Greek teachings of public virtue. Regarding Islamic democracy, the text offers case studies of Turkey, Egypt, Tunisia, and Malaysia - thus deftly illustrating the potential of comparative political theorizing.” (Fred Dallmayr, University of Notre Dame, USA, and author of The Promise of Democracy (2010) and Freedom and Solidarity (2015))