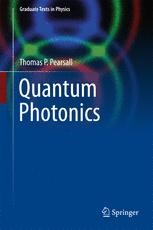 This textbook employs a pedagogical approach that facilitates access to the fundamentals of Quantum Photonics. It contains an introductory description of the quantum properties of photons through the second quantization of the electromagnetic field, introducing stimulated and spontaneous emission of photons at the quantum level. Schrödinger’s equation is used to describe the behavior of electrons in a one-dimensional potential. Tunneling through a barrier is used to introduce the concept of non­locality of an electron at the quantum level, which is closely-related to quantum confinement tunneling, resonant tunneling, and the origin of energy bands in both periodic (crystalline) and aperiodic (non-crystalline) materials. Introducing the concepts of reciprocal space, Brillouin zones, and Bloch’s theorem, the determination of electronic band structure using the pseudopotential method is presented, allowing direct computation of the band structures of most group IV, group III-V, and group II-VI semiconductors.  The text is supported by numerous numerical calculations that can be repeated by the student.

The book includes an extensive treatment of the time duration of tunneling. The non-local nature of quantum mechanical states is further developed by the proof of Bell’s theorem and an in-depth discussion of its implications for experimental phenomena like quantum tunneling and quantum entanglement. The entangled quantum photon pair is the workhorse for exploring the fundamental non-locality of quantum mechanics, as well as important applications such as quantum cryptography. Further, the book presents the generation of entangled photon pairs by spontaneous parametric downconversion in detail using operators of the quantized photonic field.

The physics of laser action is presented using the quantum photonic basis of spontaneous and stimulated emission, highlighting the limits of Maxwell’s equations in describing quantum behavior. Further, the book shows how the quantum confinement of electrons leads to reduced threshold current on the macroscopic level. Quantum cascade and interband cascade laser structures are analyzed using methods developed in earlier chapters to show how band structure engineering can be applied to access photon emission energies that cannot be achieved using conventional materials.
Show all
About the authors

Thomas Pearsall has a distinguished career in photonic science and technology, where he has made major contributions to fibre-optic telecommunications and silicon photonics.

A graduate of Cornell University, he worked in research at Thomson/CSF, and at Bell Labs for nearly two decades. In 1990, Pearsall was named Boeing-Johnson Chair and Professor at the University of Washington.  From 1998 to 2002, he directed research on planar photonic crystals at Corning in Fontainebleau, France.

During his career, he has invented and developed the semiconductor materials and the lasers, LEDs and photodetectors that are ubiquitous in optical fiber telecommunication networks around the globe.  He has also designed and demonstrated key elements of silicon-based photonics, using strained-silicon and silicon-based photonic crystal materials.

In 2003, Pearsall started EPIC, The European Photonics Industry Consortium.  EPIC has been a leading contributor to the launch and the development of the European Technology Platform Photonics21.

“There is an in-depth treatment of quantum-mechanical tunneling together with MATLAB source code for calculations of sequential tunneling. … the book offers impressive breadth of topics, effortlessly compressed into fewer than 300 pages. There is no indication that this book has already been used for pedagogical purposes but, with the included exercises, it is eminently suited for such usage.” (K. Alan Shore, Optics & Photonics News, osa-opn.org, October, 2017)

“The book is surely interesting because it introduces many arguments that are usually only marginally explained or ignored altogether. … it may be recommended as a text of support for a course in quantum optics or photonics but cannot be used itself as a textbook for a single course.” (Mario Bertolotti, Contemporary Physics, January, 2019)