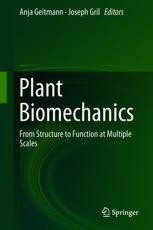 From Structure to Function at Multiple Scales

This book provides important insights into the operating principles of plants by highlighting the relationship between structure and function. It describes the quantitative determination of structural and mechanical parameters, such as the material properties of a tissue, in correlation with specific features, such as the ability of the tissue to conduct water or withstand bending forces, which will allow advanced analysis in plant biomechanics. This knowledge enables researchers to understand the developmental changes that occur in plant organs over their life span and under the influence of environmental factors.

The authors provide an overview of the state of the art of plant structure and function and how they relate to the mechanical behavior of the organism, such as the ability of plants to grow against the gravity vector or to withstand the forces of wind. They also show the sophisticated strategies employed by plants to effect organ movement and morphogenesis in the absence of muscles or cellular migration.

As such, this book not only appeals to scientists currently working in plant sciences and biophysics, but also inspires future generations to pursue their own research in this area.

Dr. Geitmann is the Dean of the Faculty of Agricultural and Environmental Sciences and Associate Vice-Principal (Macdonald Campus) of McGill University in Montreal, Canada. She holds the Canada Research Chair in Biomechanics of Plant Development and leads an interdisciplinary team of biologists and engineers. Her research group is affiliated with the Department of Plant Science located at the Macdonald Campus. Dr. Geitmann is actively involved with several learned societies. In 2013–2015 she served as President of the Microscopical Society of Canada and she was the President of the Canadian Society of Plant Biologists in 2015–2017 following mandates as Vice-President and Education Director. She is the Vice-President of the International Association of Plant Reproduction Research and she serves on the editorial boards of multiple scientific journals including Plant Physiology and The Cell Surface.

Dr. Geitmann obtained her PhD in Environmental Biology in 1997 from the University of Siena (Italy), following undergraduate and graduate studies in biology at the University of Constance (Germany), Oregon State University (USA), and Stockholm University (Sweden). From 1997 to 2001 she performed postdoctoral research at the Université Laval, Québec, and at the University of Wageningen, the Netherlands. In 2001, she was recruited as a faculty member by the Department of Biological Sciences of the Université de Montréal and the Institut de recherche en biologie végétale. She taught Plant Anatomy, Microscopy, and Scientific Communication at undergraduate and graduate levels, respectively before moving to McGill University in 2015. Dr. Geitmann has organized numerous international conferences and workshops including a NATO Workshop on Tip Growth, joint meetings between the American and Canadian Societies of Plant Biology, and an international Workshop on Cell Wall Mechanics at the Banff International Research Station. In 2018, she organized the 9th International Plant Biomechanics Conference in Montreal.

Dr. Geitmann investigates the mechanical aspects of processes involved in plant growth and reproduction. Her research combines cell biology with engineering methodology and focuses on the intracellular processes that lead to the formation of differentiated cell shapes, plant organs and functional tissues. These studies aim at understanding the interrelation between the primary cell wall and turgor, as well as the intracellular transport processes regulating cell wall assembly and mechanical behavior. One of the model cell types investigated is the pollen tube, a very rapidly growing plant cell that has the capacity to penetrate tissues, direct its growth following guidance cues, and to deliver the sperm cells during plant fertilization. Dr. Geitmann’s research group has developed sophisticated experimental and computational tools enabling researchers to answer questions such as how the pollen tube turns and how it exerts invasive forces. In other research projects her team investigates how plant cells undergo morphogenesis to generate intricate geometrical shapes and mechanical tissues with specific material properties.

Joseph Gril Dr. Gril holds a CNRS senior scientist position in mechanical engineering science and currently leads a French consortium of institutions and researchers involved in wood science. Dr. Gril graduated from Ecole Polytechnique in 1981 and from Ecole du Génie rural des Eaux et des Forêts in 1983. In 1988, he obtained a PhD in Mechanical Engineering from Paris 6 University. He was hired as a CNRS researcher in 1989 and worked in the Laboratory of Mechanics and Civil Engineering (LMGC) where in 2004 he succeeded Bernard Thibaut as leader of a research group devoted to basic and applied knowledge on wood, tree biomechanics, support of research in developing countries, introduction of wood culture in university curricula. In 2008 and 2009 he worked 5 months in the Research Institute of Sustainable Humanosphere as invited professor of Kyoto University. In 2017, he moved to Clermont-Ferrand where he joined Institut Pascal with a part-time position in the group ‘Physique et Physiologie Intégrative de l’Arbre en Environnement Fluctuant (PIAF)’.


Joseph Gril established collaborations with wood scientists in Europe, Japan, China, Morocco, Iran, etc. where he contributed through data analysis and modelling. He contributed significantly to the progress of wood mechanics in Europe through active networking activity through the COST system, for instance as vice-chair of Actions E50 “Cell-wall macromolecules and reaction wood” (2005–2009) and IE0601 “Wood science for conservation of cultural heritage” (2007–2011). He won the CNRS silver medal in 2003 and since 2004 leads the mechanical study of the wooden support of Leonardo da Vinci’s famous painting Mona Lisa. He has organized several international conferences mostly in connection with COST Actions. He co-organized the 8th International Plant Biomechanics Conference in Nagoya and served on the International Advisory Committee for the 9th Conference in Montreal.

Dr. Gril studies how wood performs its mechanical functions both in man-made objects and in living trees. He models the time-dependent deformation of wood subjected to changing climate and the relationships between structure and properties. He studies how the process of wood formation contributes to the material variability by generating mechanical interactions between tissues and collaborates with restorers to improve the conservation of ancient wooden objects. In 2012, he obtained the support of several CNRS Institutes to launch GDR3544, a multidisciplinary network aiming at the promotion of wood research and education through the organization of annual meetings, workshops, training schools and individual scientific missions. Renewed once until 2020, this network currently groups about 500 staff and 150 students from 100 French laboratories, as well as 100 scientists from 25 countries.