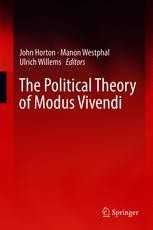 The Political Theory of Modus Vivendi

This book focuses on the idea of a modus vivendi as a way of governing political life and addressing problems characterized by pluralism or deep-rooted diversity. The individual essays illustrate both the merits and the limitations of a political theory of modus vivendi; how it might be interpreted and developed; specific challenges entailed by articulating it in a convincing form; what its institutional implications might be; and how it relates to other seminal issues and concepts in political theory; such as legitimacy, toleration, the social contract, etc. The book makes a significant contribution to the discussion on the scope and limits of liberal political theory, and on how to deal politically with deep-rooted diversity.

John Horton is Emeritus Professor of Political Philosophy at Keele University, UK. Before moving to Keele he taught at the University of York, UK, where he was for many years Director of the Morrell Centre for Studies in Toleration. He is the author of Political Obligation (rev edn 2010) and has edited or co-edited several volumes on toleration and volumes on literature and political theory and the work of Alasdair MacIntyre and of John Gray. He has published numerous articles in contemporary political philosophy, especially on toleration, political obligation and modus vivendi.
Manon Westphal is a Research Fellow at the Centre for Advanced Study in Bioethics at the University of Muenster. Her research focuses on political theory and democratic theory. She is particularly interested in pluralism, agonism and the political regulation of normative disagreement. In her doctoral thesis, she examined how agonistic conceptions of politics influence considerations about institutional design. Recent publications include “What bonds citizens in a pluralistic democracy? Probing Mouffe’s notion of a conflictual consensus”, in: Knoll, Manuel/Snyder, Stephen/Șimşek, Nurdane (eds.): Justice Beyond Consensus: Distributive Solutions to the Problems of Pluralism and Conflict. Berlin/Boston: DeGruyter (forthcoming); “Jenseits des Konsens-Ideals: Deliberation in der agonalen Demokratie“, in: Schmalz-Bruns, Rainer/Landwehr, Claudia (eds.): Deliberative Demokratie in der Diskussion. Herausforderungen, Bewährungsproben, Kritik. Baden-Baden: Nomos, 2014, 305-337.
Ulrich Willems is Professor of Political Theory at the Department Political Science at the University of Muenster. He is also Principal Investigator at the Cluster of Excellence “Religion and Politics in pre-modern and modern times”, Director of the “Centre for Religion and Modernity” and a member of the “Centre for Advanced Studies in Bioethics”, all located at the University of Muenster. Prior to Muenster he taught at Darmstadt University of Technology and the University of Hamburg. His research interests include political theory, political pluralism, democracy and pluralism, interest groups, politics and religion, and morality policy, especially biopolitics. He is author of Value Conflicts as a Challenge to Democracy (Springer VS 2015, in German) and Development, Interests and Morality: The Development Policy of the Protestant Church of Germany (Leske + Budrich, 1998, in German) as well as co-editor of “Modernity and Religion” (Transcript 2013, in German), Politics and Contingency (Springer VS 2012, in German), Interest Intermediation in Policy Fields (VS 2009, in German) and Interest Groups in Germany (VS 2007, in German).