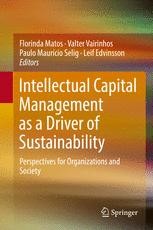 Intellectual Capital Management as a Driver of Sustainability

Perspectives for Organizations and Society

Florinda Matos is the founder and the president of Intellectual Capital Association (ICAA) and is leading the ICLab – Intellectual Capital Research Center. She holds a PhD in Social Sciences, Organizational Behavior Studies from the Technical University of Lisbon (Portugal). She is a guest professor in Post-Graduate courses at the ISCTE – Instituto Universitário de Lisboa and in several other higher education institutions. She was a researcher at FCT - UNL in the area of social impacts of additive manufacturing and, currently, she is a researcher at DINÂMIA'CET – IUL, Centre for Socioeconomic and Territorial Studies. Her main research interests are: Intellectual Capital, Knowledge Management, Sustainability, Measuring of Intangibles and Innovation. She has published more than 30 academic articles and book chapters. She has also been an active participant in the press, where she has published more than 200 articles of opinion on issues of economic and social actuality, and she has developed a scoring framework for auditing the management of intellectual capital.

Valter Vairinhos is a retired Portuguese Navy officer, where he served as a naval engineer between 1964 and 2009. He got his Naval Engineer Degree from Portuguese Naval School, an Applied Mathematics Degree and a Master´s degree in Statistics and Operations Research from Faculdade de Ciências, Lisbon Classic University and a Doctoral Degree in Multivariate Data Analysis, from the Statistics Department of the Salamanca University. Currently, he shares his investigation activity between ICAA and the Statistics Department of Salamanca University.

His main investigative interests are related with graph data mining and automatic synthesis of results from multivariate data analysis, being the author of a methodology, based on intersection graphs, to generate automatic synthetic descriptions of results from multivariate data analysis and its implementation through a software (BiplotsPMD), where those ideas are put into use.

Paulo Selig is a guest professor of the Post-Graduate Program in Engineering and Knowledge Management at the Federal University of Santa Catarina (Brazil). He acted as professor of undergraduate and post-graduate courses in Production Engineering for more than 30 years. He was the founder and coordinator of the postgraduate program in Engineering and Knowledge Management at the Federal University of Santa Catarina (Brazil). His research deals with topics such as: processes of evaluation of productive systems (tangible as intangible), intellectual capital, performance indicators, value analysis and cost systems. It has books and book chapters, as well as publications in national and international magazines. He is a consultant to several business organizations and some large multinationals. As the research project developed jointly with the Pontifical Catholic University of Rio Grande do Sul (PUCRS) and the Stela Institute for Petrobras, in the theme: Human Factors. He was one of the creators of the Brazilian Value Analysis Association. In this role, he coordinates projects funded by the Organization of American States (OAS) and national funding agencies. His most recent work involves being the scientific coordinator of a project on "Regional Analysis of Science, Technology and Innovation Framework" for the state of Santa Catarina (Brazil). And general coordinator of the International Congress of Knowledge and Innovation (CIKI).

Professor emeritus Leif Edvinsson is a key pioneering contributor to theory and practice of Intellectual Capital(IC). The world’s first Director of IC in 1991. Prototyping in 1996 the Skandia Future Center as Lab for Organisational design. In 1998, awarded by Brain Trust "Brain of the Year" award, UK. Listed in Who’s Who in the world. Earlier Associate member of The Club of Rome. Cofounder and Founding Chairman of The New Club of Paris.  In 2013 awarded the Thought Leader Award by European Commission, Intel and Peter Drucker Association. In 2015 appointed Advisory Board to JIN - the Japan Innovation Network. Appointed 2016 to the Advisory Board of Norway Open Innovation Forum. Together with UN Awarded the KM Award 2017, in Geneva Palais des Nationas, by km-a.net.