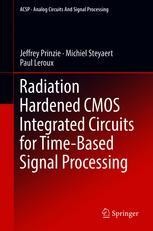 This book presents state-of-the-art techniques for radiation hardened high-resolution Time-to-Digital converters and low noise frequency synthesizers. Throughout the book, advanced degradation mechanisms and error sources are discussed and several ways to prevent such errors are presented. An overview of the prerequisite physics of nuclear interactions is given that has been compiled in an easy to understand chapter. The book is structured in a way that different hardening techniques and solutions are supported by theory and experimental data with their various tradeoffs.

Dr. Jeffrey Prinzie received is M.Sc. degree and PhD degree from KU Leuven in 2013 and 2017 respectively. He worked as a PhD researcher in the field of radiation tolerant integrated circuits with the ADVISE research group. His main interest goes to the hardening of time-based mixed-signal and RF circuits, especially PLLs and TDCs and radiation sensors. He gained experience in the design and experimental testing of these circuits in nuclear facilities. During his PhD, he was part of the CERN micro-electronics research group in which he is collaborating on a TDC SoC and high speed multi-gigabit transceiver.

Michiel Steyaert is since 2012 Dean of the Faculty of Engineering Science. He was in 1988 a Visiting Assistant Professor at the University of California, Los Angeles. Between 1989 and 1996 he was appointed by the National Fund of Scientific Research (Belgium) and as associated professor at the Laboratory ESAT-MICAS, KU Leuven. Since 1997 he is a Full Professor at the Laboratory ESAT-MICAS, KU Leuven. He was the Chair of the Electrical Engineering Department from 2005 until 2012. He is current research interests are in high-performance and high-frequency analog integrated circuits for telecommunication systems, analog signal processing and power management CMOS techniques. Prof. Steyaert authored or co-authored over 500 papers in international journals or proceedings and co-authored over 25 books. He received among the first in Belgium an ERC-advanced grant for the design of CMOS mm-wave circuits, and received as first Belgium Engineering Science the Methusalem grant for the implementation of CMOS Power management circuits.

His current research activities within the ADVISE research group focus on radiation hardened IC design for nuclear fusion, space and high-energy physics applications, circuits for optical communication and instrumentation and micro-electronics for ultra-wideband and microwave sensing systems. His group is part of the CERN CMS collaboration where Prof. Leroux is acting as KU Leuven team leader.  Paul Leroux has (co)authored over 110 papers in international journals and conference proceedings. He is Senior Member of the IEEE. In 2010, Prof. Leroux received the SCK-CEN Prof. Roger Van Geen Award from the FWO and FNRS for his highly innovative work on IC design for harsh radiation environments.