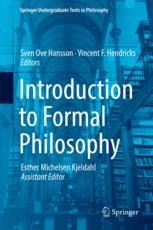 This Undergraduate Textbook introduces key methods and examines the major areas of philosophy in which formal methods play pivotal roles. Coverage begins with a thorough introduction to formalization and to the advantages and pitfalls of formal methods in philosophy. The ensuing chapters show how to use formal methods in a wide range of areas.

Throughout, the contributors clarify the relationships and interdependencies between formal and informal notions and constructions. Their main focus is to show how formal treatments of philosophical problems may help us understand them better. Formal methods can be used to solve problems but also to express new philosophical problems that would never have seen the light of day without the expressive power of the formal apparatus.

Sven Ove Hansson is professor in philosophy at the Department of Philosophy and History, Royal Institute of Technology, Stockholm. He is editor-in-chief of Theoria and of the two book series Outstanding Contributions to Logic and Philosophy, Technology and Society. He is the author of more than 350 articles in international refereed journals and books, in research areas including logic, philosophy of science and technology, epistemology, value theory, philosophy of risk, fundamental and applied moral theory, and political philosophy. His recent books include The Ethics of Risk (2013), David Makinson on Classical Methods for Non-Classical Problems (2014, edited), Norms in Technology (2013, edited with Marc J. de Vries and Anthonie W.M. Meijers), The Role of Technology in Science: Philosophical Perspectives (2015, edited), The Argumentative Turn in Policy Analysis. Reasoning about Uncertainty (2016, edited with Gertrude Hirsch Hadorn, 2016), The Ethics of Technology. Methods and approaches (2017, edited), Descriptor Revision. Belief change through direct choice (2018) and Belief Change. Introduction and Overview (with Eduardo Fermé, in press). He is member of the Royal Swedish Academy of Engineering Sciences (IVA) and past president of the Society for Philosophy and Technology.

Vincent F. Hendricks is professor of formal philosophy at The University of Copenhagen. He is director of the Center for Information and Bubble Studies (CIBS) sponsored by the Carlsberg Foundation. Hendricks has been awarded a number of national and international prizes for his research in formal epistemology, methodology, logic, information theory, social psychology and bubble studies, among them the Elite Research Prize by the Danish Ministry of Science, Technology and Innovation, the Roskilde Festival Elite Research Prize, The Rosenkjær Prize by the Danish Broadcasting Company, and the Choice Magazine Outstanding Title Award. He was editor-in-chief of Synthese: An International Journal for Epistemology, Methodology and Philosophy of Science between 2005 and 2015.