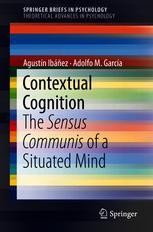 The Sensus Communis of a Situated Mind

Contextual Cognition will be of interest to students, teachers, and researchers from the fields of cognitive science, neurology, psychiatry, neuroscience, psychology, behavioral science, linguistics, and philosophy.

Dr. Agustín Ibáñez has an outstanding track record in the fields of cognitive neuroscience, experimental psychology, and neurodegeneration research with over 100 ISI publications in the last five years, including published works in top-ten journals on neuropsychiatric research (e.g., JAMA Neurology, Nature Reviews Neurology, Neurology, World Psychiatry, Cortex) and cognitive neuroscience (e.g., Brain, Journal of Neuroscience, Scientific Reports, SCAN). After obtaining his PhD, Dr. Ibáñez specialized in electrophysiology at the Max Plank Institute for Brain Research (Germany), and did his postdoctoral studies in neuroscience at the Neuroscience Center of Cuba and in the Universität Heiderlberg (Germany). He is currently the Director of the Institute of Translational and Cognitive Neuroscience (INCyT, Argentina). In addition, he is an independent researcher at the National Scientific and Technical Research Council (CONICET), a researcher at the Universidad Adolfo Ibáñez (Chile), and an Associate Investigator of the ARC Centre of Excellence in Cognition and its Disorders (CCD, Australia). Since 2009, he has directed, co-directed, and evaluated more than 25 Masters, Ph.D., and postdoctoral research projects. He has received numerous prestigious international awards and grants, and has established international collaborations with centers of excellence such as the University of Heidelberg (Germany), the MRC Cognition and Brain Science Unit of Cambridge and the University of Edinburgh (United Kingdom), and the Universities of New York, Caltech, Chicago, and Wisconsin (USA), among others. His work has helped South American translational neuroscience by establishing a framework to engage basic scientists in translational projects through internships, workshops, Masters and Ph.D. programs; organizing educational activities for the medical community, focusing on cognitive neuroscience for general neurologists, biologists, psychologists, other health professionals, and fellows in neurology and other medical specialties; and developing an active, multi-institutional agenda to raise public awareness of neuroscience in South America. He has proposed the so-called Social-Context Network Model (a fronto-temporo-insular brain network engaged in contextual modulation on different social cognition domains). Dr. Ibáñez has previously applied this model to the study of the frontotemporal dementia, as well as other neuropsychiatric conditions (autism, developmental disorders, other neurodegenerative conditions, schizophrenia). He has proposed the study of specific brain networks in frontotemporal dementia and Parkinson’s disease; performed different studies in neurodegenerative diseases (Alzheimer’s disease, frontotemporal dementia, Parkinson’s disease, Huntington’s disease, among others); combined EEG, imaging, and behavioral assessment in early degeneration; and produced several studies with behavioral and brain activation measures (hdEEG and fMRI) as well as brain connectivity tools in several neuropsychiatric conditions.

Dr. Adolfo M. García specializes in the neuroscience of language. He is the Scientific Director of the Laboratory of Experimental Psychology and Neuroscience, at the Institute of Cognitive and Translational Neuroscience (Argentina). He is also a researcher at the National Scientific and Technical Research Council (Argentina) and the UDP-INECO Foundation Core on Neuroscience (Chile). In addition, Dr. García is Adjunct Professor of Neurolinguistics at the Faculty of Elementary and Special Education (National University of Cuyo, Argentina) and member of the TREC (Translation, Research, Empiricism, Cognition) Network, based on the Autonomous University of Barcelona (Spain). He is also an associate editor for the Journal of World Languages and the Journal of Alzheimer’s Disease, and a reviewer for dozens of leading journals in neuroscience, neurolinguistics, and linguistics. Dr. García has received training in neurolinguistics at New York University and Rice University (USA), and he has disseminated his work in multiple scientific and academic events worldwide. As a professor, he has taught undergraduate, graduate, and professional development courses in Argentina, Chile, Colombia, USA, Germany, and China. From 2011 through 2014 he served as Adjunct Professor of Translation Studies at the National University of Córdoba (Argentina). He has also been a Visiting Professor at Macquarie University (Australia), Universidad del Valle (Colombia), Universidad de Antioquia (Colombia), Pontifica Universidad Católica de Valparaíso (Chile), and Johannes Gutenberg University (Germany). He has supervised numerous research fellows and acted as thesis advisor to undergraduate, Masters’, and Ph.D. students in Argentina and Europe. He also serves as researcher in international projects hosted by Latin American and European institutions, and as a research consultant for the Inter-American Development Bank. In addition, he regularly reviews research projects for national agencies in several countries. He has more than 100 publications, including books, chapters and articles in leading journals, such as Nature Human Behavior, Brain, Neuroscience and Biobehavioral Reviews, Philosophical Transactions of the Royal Society, Scientific Reports, Journal of Medical Genetis, Cortex, Cognition, Brain and Language, and Journal of the International Neuropsychological Society. His books include Mente bilingüe (Comunicarte, 2016); An Introduction to Relational Network Theory (Equinox, 2017); and Neuroscience and Social Science: The Missing Link, co-edited by Agustín Ibáñez and Lucas Sedeño (Springer, New York, 2018). Dr. García has organized several scientific meetings with worldwide impact, including the first edition of the international conference series “Translation, interpreting, and cognition”. He also works actively in the public dissemination of science. A highlight in this area is his participation in the contents and design team of Cerebreando, a public, nation-wide exhibition promoting the social appropriation of neuroscientific knowledge in Argentina. Also, he has formulated the Hand-Action-Network Dynamic Language Embodiment (HANDLE) model, a theoretical proposal which accounts for neurocognitive synergies during joint processing of language and manual movements. In 2013, he received the Most Outstanding Paper Award from the Linguistic Association of Canada and the United States. That same year he was distinguished by the Ibero-American Neuroeducation Society. In 2015, he was awarded the Young Investigator Prize, granted by the Argentine Association of Behavioral Science.