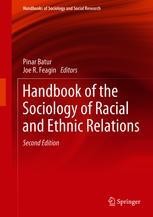 Handbook of the Sociology of Racial and Ethnic Relations

This 2nd edition of the Handbook explores how to conceptualize new realities of race and ethnic relations. Now that the decade of the 1960s, the pivotal moment of mobilization against racism, racial discrimination, xenophobia and related tolerance is behind us, we are witnessing the intensification of racial and ethnic inequality, an increasing frequency of racial and ethnic conflict and violence, but also the sound of powerful voices of struggle against it. This volume examines contemporary issues and critical discussions regarding race and ethnic relations in the United States as well as globally. Case studies and comparative approaches examine the foundations of a comprehensive sociological theory of race and ethnic relations, such as connections between everyday interactions, as well as patterns of discrimination and segregation, and theoretical positions to activism. Chapters are updated reflecting contemporary issues and theoretical developments in the field. Includes new chapters focusing on topics such as global racism, environmental racism, criminalization, militairy, health and queer theory. This revised volume provides an updated solid reference book for those interested in race and ethnic studies.

Pinar Batur is a Professor of Sociology at Vassar College, where she has chaired multidisciplinary programs in Urban Studies (1999-2006), International Studies (2007-2010) and Environmental Studies (20012-2016), and Department of Sociology (2017- ). She also served the college as the Director of Research (2002-2005) and the elected chair of the research committee (2013-2016). She has authored books and articles on global racism and anti-racism, including The Global Color Line (1999), and White Racism (2000). She is the author of several articles examining racism, anti-racism and political discourse, including “Heart of Violence: Global Racism, War and Genocide,” and “Centering on Global Racism and Anti-Racism: From Everyday Life to Global Complexity.” Her new interest area is environmental thought and she works on Turkish authors and intellectuals, such as Yaman Koray and Halikarnas Balıkçısı, and on green discourse and eco-consciousness. She has received grants from SSRC, IREX, The Kennan Institute at the Woodrow Wilson Center, the Hoover Institution, HR Guggenheim Foundation, SENCER, InTeGrate and the Dreyfus Foundation, among others.

Joe Feagin, Ella C. McFadden Professor and University Distinguished Professor at Texas A&M University, does research on racism, sexism, and classism issues. He has published many scholarly books and hundreds of scholarly articles in these research areas. Among his books are Systemic Racism (Routledge 2006); Two-Faced Racism (Routledge 2007, with L. Picca); The White Racial Frame (2nd ed; Routledge 2013); Racist America (3rd ed; Routledge 2014); White Party, White Government (Routledge 2012); Latinos Facing Racism (Paradigm 2014, with J. Cobas); The Myth of the Model Minority (2nd ed., Paradigm, 2015, with R. Chou); Liberation Sociology (3rd ed., Paradigm, 2015, with H. Vera, K. Ducey); and How Blacks Built America (Routledge, 2016). He has served as Scholar-in-Residence at the U.S. Commission on Civil Rights and is the recipient of the American Association for Affirmative Action’s Fletcher Lifetime Achievement Award and the American Sociological Association’s W. E. B. Du Bois Career of Distinguished Scholarship Award. He was the 1999-2000 president of the American Sociological Association.