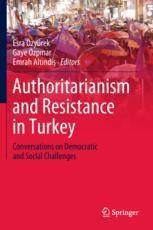 Authoritarianism and Resistance in Turkey

Conversations on Democratic and Social Challenges

This book offers an in-depth overview of Turkish history and politics essential for understanding contemporary Turkey. It presents an analysis on a number of key issues from gender inequality to Islamism to urban regeneration. Based on interviews with leading intellectuals and academics from Turkey, the book’s theme follows the dramatic transformations that have occurred from the 1980 military coup to the coup attempt of 2016 and its aftermath. It further draws attention to the global flows of capital, goods, ideas, and technologies that continue to influence both mainstream and dissident politics. By doing so, the book tries to unsettle the assumption that Erdoğan and his Islamic ideology are the sole actors in contemporary Turkey. This book provides unusual insight into the Turkish society bringing various topics together, and increases the dialogue for people interested in democratic struggles in 21st century under neoliberal authoritarian regimes in general.

Esra Özyürek is an Associate Professor and Chair for Contemporary Turkish Studies at the European Institute, London School of Economics. She received her BA in Sociology and Political Science at Boğaziçi University, Istanbul and her MA and PhD in Anthropology at the University of Michigan, Ann Arbor. Before joining the LSE she taught at the Anthropology Department of University of California, San Diego. Dr. Özyürek a political anthropologist who seeks to understand how Islam, Christianity, secularism, and nationalism are dynamically positioned in relation to each other in Turkey and in Europe. Her most recent book Being German, Becoming Muslim: Race, Religion and Conversion in the New Europe has been published by the Princeton University Press (2014). Her previous book Nostalgia for the Modern: State Secularism and Everyday Politics in Turkey has been published by Duke University Press (2007). She also is the editor of Politics of Public Memory in Turkey published by Syracuse University Press (2007) and Unuttuklarɩ ve Hatɩrladɩklarɩyla Turkiye’nin Toplumsal Hafɩzasɩ by İletişim Yayɩnevi (2002).

Gaye Ozpinar is an immigration and human rights lawyer.  She was born and raised in Turkey.  She came to the US to study politics at Brandeis University and stayed on to continue her education in law at Suffolk University.  While pursuing her studies she was a student volunteer with the Suffolk Civil Rights Project and also the Massachusetts ACLU.  Through Political Asylum and Immigration Reform Project (PAIR) she worked with many torture survivors and assisted with asylum applications.  She is the past president and a current Board Member of 'Bostonbul' a forum of activists that organically came together in Boston in June 2013 simultaneously as the Gezi protests took place in Turkey.  She has given interviews to Turkish dailies such as Agos, T24 and Birgun on human rights issues.   She is also a member of the American Immigration Lawyers Association (AILA) and National Lawyers Guild (NLG).  In 2015 she was selected as a 'Rising Star' and a Top Female Attorney in Massachusetts by Super Lawyers magazine.

Emrah Altındiş is a medical scientist. He received his Ph.D. in Molecular and Cellular Biology from Bologna University (Bologna, Italy). He joined Harvard Medical School as a postdoctoral fellow in 2011 and is currently working as an Instructor in Medicine (Boston, USA). He has published several scientific research articles in the fields of microbiology and diabetes. He has also been a human rights activist, and for over a decade wrote political opinion pieces to various Turkish newspapers (Radikal, BirGün, Cumhuriyet), journals (Birikim) and news websites (Diken, Bianet) and has given interviews to several national and international media outlets.
Show all
Reviews

“This volume is impressive in many ways, especially for the caliber of interviewees, many of whom are currently incarcerated for their views. The high quality of most of these interviews is also to be commended. While I am not sure that all of the interviews or sections talk to each other - with the volume possibly addressing too many different aspects at once -, they undoubtedly remain a very interesting read.” (Balki Begumhan Bayhan, Interdisciplinary Political Studies, Vol. 6 (2), 2020)