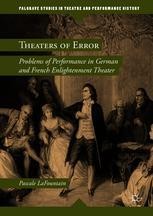 Problems of Performance in German and French Enlightenment Theater

This book offers provocative readings of canonical Enlightenment dramas that reflect and shape the period’s changing understanding of error. With striking interdisciplinary connections to theater treatises as well as works from the philosophical, legal, and medical discourses, it tracks the relocation of error from the moral to the physical realm, a movement that begins with Lessing and continues through the turn of the nineteenth century.
Featuring detailed analyses of Lessing’s Miß Sara Sampson, Diderot’s Le Fils naturel, Schiller’s Die Räuber, and Kleist’s Die Familie Schroffenstein alongside rich close readings of diverse primary sources, ranging from previously untranslated acting treatises by Sainte-Albine and Engel to texts from the German Archiv des Criminalrechts, this study introduces the reader to new Enlightenment sources and compellingly concludes that ultimately it is no longer evil, but rather bodily irregularities and mistakes in reading the body that become the driving principle of Enlightenment drama.

Pascale LaFountain is Assistant Professor of German and French at Montclair State University in New Jersey, USA. She received her Ph.D. in German Studies from Harvard University in 2011. Her publications on theater, gender, and performance include articles and book chapters on G. E. Lessing, Heinrich von Kleist, Elfriede Jelinek, and Heiner Müller.

“LaFountain’s focus on “Theaters of Error” deals authoritatively with the reassessment by French and German Enlightenment dramatists of the relevance and applicability of Aristotelian hamartia to stage productions. Her well researched evaluation of the theory and practice of the likes of Diderot, Lessing, Schiller and Heinrich von Kleist parses the implications of theatrical performance in its moral dimensions, gestural semiotics and its linkage to human sensory experience. The productions and theories of that century are shown to trace a shift honoring Aristotle while also moving beyond the past toward the ‘modernity’ of the 19th century.” (Richard E. Schade, Managing Editor, Lessing Yearbook (1986-2010))

“This book is as erudite as it is instructive. Attentive to on-stage affect, gesture, illness, stuttering and blushing, Pascale LaFountain shows how, in the wake of Lessing’s refusal to moralize error unequivocally, Diderot, Schiller, Kleist and others increasingly locate the tragic flaw in the fallibility of the human body. Deftly tracing this incorporation of hamartia throughout the eighteenth and into the nineteenth century, LaFountain reveals how French and German-language theatrical traditions continuously draw upon and influence one another. Situating these reflections within their philosophical context, the implications of this investigation reach far beyond the evolving tragic genre, though, indeed opening new perspectives onto the very advent of the modern episteme, the beginnings of which LaFountain reveals to be an “epoch of error”.” (Ian Fleishman, University of Pennsylvania, USA, author of An Aesthetics of Injury: The Narrative Wound from Baudelaire to Tarantino)

“The focus on the concept of hamartia (error) is an original, intriguing, and productive approach that illustrates the changes in the self-understanding and reception of German drama in the second half of the 18th and the beginning of the 19th century.  In the light of French and German acting theories the author shows in well-argued interpretations of plays by Gotthold Ephraim Lessing, Denis Diderot, Friedrich von Schiller, and Heinrich von Kleist how a completely new understanding of hamartia evolves.” (Monika Nenon, University of Memphis, USA)