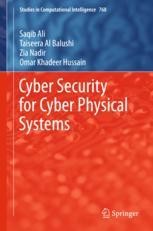 This book is a pioneering yet primary general reference resource on cyber physical systems and their security concerns. Providing a fundamental theoretical background, and a clear and comprehensive overview of security issues in the domain of cyber physical systems, it is useful for students in the fields of information technology, computer science, or computer engineering where this topic is a substantial emerging area of study.

Dr. Saqib Ali is an IT professional with solid experience across both business and academic settings. His areas of expertise include business analysis, software development, information systems, management and implementation, and using this expertise he has introduced innovative strategies and practices that deliver growth and competitive superiority. He has published widely and actively participated in and leading conferences, workshops and seminars delivered nationally and internationally. He also provides lectures and tutorials for future IT leaders.

Dr. Taisira Al Balushi is an assistant professor at the College of Economics and Political Science, Information Systems Department at SQU, Oman. Her main research interests involve the integration of quality concerns into software systems development projects by the application of widely recognized standards such as ISO, IEEE, etc. Dr. Taiseera is active in the area of teaching and she received the Best Teacher Award for the academic year 2012/2013. She is also active in the area of research and has received two SQU internal grants, two grants from The Research Council of Oman and one strategic research fund grant from His Majesty Trust Fund of Oman. Dr. Taiseera has completed a number of industry-related projects with undergraduate students, including the Royal Oman Police (ROP) emergency application and the Ministry of Manpower mobile application.

Dr. Zia Nadir is currently an associate professor and assistant head of the ECE Department at SQU, Oman. He received an B.Sc. (Hons.) degree in Electrical Engineering with specialization in Communication Systems from the University of Science & Technology, Peshawar, Pakistan in 1989. He received the D.E.S.S. degree in Microwaves and Microelectronics and D.E.A. degree in Electronics and Ph.D. in Electronics with specialization in Electromagnetic Compatibility from Laboratory of Radio Propagation and Electronics-LRPE (renamed TELICE), University of Science and Technology Lille-1, France in 1996, 1997 and 1999, respectively. From 1990 to 1994, he worked at WAPDA, the Electricity Department of Pakistan. In 1999, he became assistant director (technical) at the High Voltage and Short Circuit Laboratory, Islamabad, Pakistan, where he was mainly involved in testing procedures, standards and performing tests on transformers, switchgears, insulators, and power transformers. He has received several university and faculty-level awards. Since 2001, he has been attached to the Electrical and Computer Engineering Department, Sultan Qaboos University, Muscat, Oman.

Dr. Omar Khadeer Hussain is currently a senior lecturer at the School of Business, UNSW, Canberra. Prior to joining the School as a lecturer in February 2014, he worked as a senior research fellow at Curtin University. Omar’s research interests include Logistics and Supply Chain Management, Distributed and Grid Systems, Decision Support, Group Support Systems and their applications to Logistics areas. Omar’s research has been published in international journals such as The Computer Journal and the Journal of Intelligent Manufacturing. He has received university and faculty-level awards for his research. In 2011, he was awarded an APDI fellowship by the ARC for a Linkage project with Prof Elizabeth Chang as the lead CI.