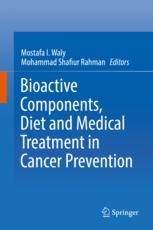 The high rate of urbanization and a steady increase in per capita income has improved the socio-economic status of people all over the world. This has resulted in drastic changes in their lifestyle and food consumption patterns, where traditional foods are being replaced with more ready-made junk foods with few servings of fresh vegetables and fruits. It has been postulated that industrialization has caused change in food choice, dietary pattern modification and resulted in a sedentary lifestyle. In addition, contaminated foods with unsafe microbes and chemical hazards are increasing. All of these events have resulted in an increased risk of cancer, the leading cause of mortality and morbidity worldwide.

This book will provide a basic understanding of cancer, its risk factors, preventive measures, and possible treatments currently available, as well as identifying the different dietary factors that might synergize with a sedentary lifestyle in the etiology of cancer, and its prevention measure.

Dr. Mostafa I. Waly gained his PhD in 2003 from the Northeastern University (Boston, USA), in the field of Health Sciences. He is currently hold the position of an Associate Professor in the Department of Food Science and Nutrition at the College of Agricultural and Marine Sciences, Sultan Qaboos University (Muscat, Oman). He has been working in the area of Nutritional Biochemistry for the past 15 years, and his research focuses on understanding the protective effect of dietary bioactive agents against oxidative stress-mediated human chronic diseases, including cancer. His laboratory studies are being used in vitro and in vivo experimental models to identify the metabolic aspects and mechanisms underlie the therapeutic effects of specific nutrients. His research work has resulted over 90 publications in international peer-reviewed journals and acquired high ranking citations in scientific metrics such as Scopus, Reserachgate, PubMed, and Google Scholar. He is the editor-in-chief and founder for the Canadian Journal of Clinical Nutrition and serving in the editorial boards of another 8 international journals. He is an active member in the American Society for Biochemistry and Molecular Biology, American Society for Nutrition, International Society of Antioxidants in Nutrition and Health, Society of Experimental Biology and Medicine.

Professor Shafiur Rahman is the author/co-author of over 300 technical articles including more than 140 journal papers and 12 books. He is the author of the internationally acclaimed and award-wining Food Properties Handbook, and editor of the popular Handbook of Food Preservation published by CRC Press, Florida. First editions received the bestseller recognition and the third edition will be released soon. First edition was also translated into Spanish. He has initiated the International Journal of Food Properties and serving as the founding Editor-in-Chief for more than 20 years, and serving in the editorial boards of 10 international journals and book series. In 1998 he has been invited and continued to serve as a Food Science Adviser for the International Foundation for Science, Sweden. He was invited as a key note/plenary speaker for more than 10 international conferences in the food science and engineering area. In 2014, he has initiated and served as the Founding Chair of the International Conference on Food Properties (iCFP) and initiated the ICFP Mentoring Program for the young scientists and academics. He received the HortResearch Chairman's Award, BRAP Award, CAMS Outstanding Researcher Award 2003, and SQU Distinction in Research Award 2008. In 2008, Professor Rahman has ranked among the top five Leading Scientists and Engineers of 57 OIC Member Countries in the Agroscience Discipline. Professor Rahman is an eminent scientist and academic in the area of food processing. He is recognized for his significant contribution to the basic and applied knowledge of food properties related to food structure, engineering properties and food stability. His total Google Scholar citations is more than 20,000 (h-index: 61) (16 November 2017), indicating high impact of his research in the international scientific community.