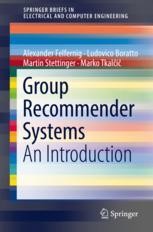 Alexander Felfernig is a full professor at the Graz University of Technology (Austria) since March 2009 and received his PhD in Computer Science from the University of Klagenfurt. He directs the Applied Software Engineering (ASE) research group. His research interests include configuration systems, recommender systems, model-based diagnosis, software requirements engineering, different aspects of human decision making, and knowledge acquisition methods. In these areas, he is engaged in national research projects as well as in a couple of European Union projects. Alexander Felfernig has published numerous papers in renowned international conferences and journals (e.g., AI Magazine, Artificial Intelligence, IEEE Transactions on Engineering Management, IEEE Intelligent Systems, Journal of Electronic Commerce) and is a co-author of the book on "Recommender Systems" published by Cambridge University Press. He also acted as an organizer of international conferences and workshops such as the ACM International Conference on Recommender Systems and the International Symposium on Methodologies for Intelligent Systems and is currently a member of the Editorial Board of Applied Intelligence and the Journal of Intelligent Information Systems. With his research, he contributed to the development of commerical decision support and recommender systems such as ChoiclaWeb and EventHelpr.

Martin Stettinger studied Software Development and Business Economics at Graz, University of Technology and graduated in 2013 as MSc. with honors. He received his PhD in informatics in 2016 with honors.  At the moment, he is Senior Researcher at the Institute of Software Technology at Graz University of Technology, and co-founder and CTO of the 2013 founded SelectionArts Intelligent Decision Technologies Inc. The research focus of Martin Stettinger is in the field of recommender systems and includes recommendation-supported e-Learning, human decision making and highly personalized software systems. These topics include amongst others recommendation technologies for group decision tasks, different aspects of human learning and decision making behavior as well as different methods of knowledge acquisition. He published over 35 publications at international workshops, conferences, and journals. He has long-term experience in software projects and special expertise in the areas of mobile devices, Web-programming, and Web-applications.

Ludovico Boratto is a researcher in the Data Science and Big Data Analytics research group at Eurecat. His research interests focus on Data Mining and Machine Learning approaches, mostly applied to recommender systems and social media analysis. The results of his research have been published in top-tier journals, such as Information Sciences (Elsevier) and IEEE Intelligent Systems. His research activity also brought him to give talks and tutorials at top-tier conferences (e.g., ACM RecSys 2016, IEEE ICDM 2017) and research centers (Yahoo! Research). He has been guest editor of special issues for several ISI and Scopus indexed journals, such as “Information Systems Frontiers” (Springer), “Journal of Intelligent Information Systems” (Springer), “International Journal of Human-Computer Studies” (Elsevier), and “Information Retrieval Journal” (Springer). He has also been part of the program committee of the main Data Mining and Web conferences, such as RecSys 2017, WSDM 2017, ICWSM 2017 and 2018, IUI 2017, and TheWebConf 2018. In 2012, he received a Ph.D. at the University of Cagliari, where he was a research assistant until May 2016. In 2010 and 2014 he spent 10 months at Yahoo! Research in Barcelona as a visiting researcher. He is a member of the ACM.

Marko Tkalčič is Assistant Professor at the Faculty of Computer Science at the Free University in Bolzano, Italy. He received his PhD from the Faculty of Electrical Engineering at the University of Ljubljana in 2011. After a postdoc at the University of Ljubljana, he worked as a postdoc at the Johannes Kepler University in Linz, Austria from 2013 to 2015. From 2016 he is with the Free University of Bolzano. His research explores ways in which psychologically-motivated user characteristics, such as emotions and personality, can be used to improve personalized systems. It employs methods such as user studies and machine learning. Dr. Tkalčič has published in prestigious journals, such as Elsevier Information Sciences and Springer UMUAI. He has presented at venues, such as RecSys and UMAP. Recently he edited the book Emotions and Personality in Personalized Systems with Springer. He is active in organizing conferences (RecSys 2017, UMAP 2017) and workshops (EMPIRE, SOAP, HUMANIZE), editing special issues, and reviewing for prestigious journals, conferences, and grant bodies. He is a member of the editorial board of the UMUAI journal.