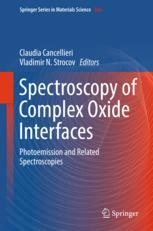 This book summarizes the most recent and compelling experimental results for complex oxide interfaces. The results of this book were obtained with the cutting-edge photoemission technique at highest energy resolution. Due to their fascinating properties for new-generation electronic devices and the challenge of investigating buried regions, the book chiefly focuses on complex oxide interfaces.
The crucial feature of exploring buried interfaces is the use of soft X-ray angle-resolved photoemission spectroscopy (ARPES) operating on the energy range of a few hundred eV to increase the photoelectron mean free path, enabling the photons to penetrate through the top layers – in contrast to conventional ultraviolet (UV)-ARPES techniques. The results presented here, achieved by different research groups around the world, are summarized in a clearly structured way and discussed in comparison with other photoemission spectroscopy techniques and other oxide materials. They are complemented and supported by the most recent theoretical calculations as well as results of complementary experimental techniques including electron transport and inelastic resonant X-ray scattering.

Claudia Cancellieri has the following Professional Experience and Education: (2014–present) She is a Research Scientist at the Laboratory for Joining Technologies and Corrosion, EMPA, Dübendorf, Switzerland. Her research interests include Surface analysis and growth of oxides on metals and study of metallic nanomultilayers. (2011–2014) She completed her Post-Doctoral Fellowship in Surface X-Ray Diffraction Station, Materials Science Beamline at the Swiss Light Source (SLS), Paul Scherrer Institut (PSI), Villigen, Switzerland, under the title “Study of the structure and electronic properties of complex-oxide interfaces grown by laser ablation for transistors and electronic devices applications”. (2008–2011) She completed her Post-Doctoral Fellowship in the Department of Condensed Matter Physics, University of Geneva, Switzerland, which includes Research on complex oxide interfaces, field-effect devices, Study of the growth by laser ablation and electronic characterization of complex oxides, and Study of the interface properties: magnetotransport, x-ray diffraction, superconductivity, and topography. (2004–2008) She received her PhD in Physics, Ecole Polytechnique Fédérale de Lausanne (EPFL), Lausanne, Switzerland, Thesis title: “Photoemission and electronic properties of thin (strained) cuprate films by laser ablation heteroepitaxy”. Her areas of interest include Research on thin films of superconducting materials, Construction and optimization of a new Pulsed Laser Deposition (PLD) system for thin-film growth linked to a photoemission chamber for in-situ Angle-Resolved Photoemission Spectroscopy (ARPES) electronic analysis and Study of structural, electronic and superconducting properties of La2−xSr2CuO4 thin films under epitaxial strain. (2003–2004) She did her Diploma thesis work (Master of Science) at the ENEA Frascati Research Center in Frascati, Rome, Italy, Title: “Deposition and characterization of Ca-doped YBa2Cu3O7 − epitaxial thin films”. The work focused on the effect of oxygen on the superconducting and structural properties of the films changed by the post-annealing treatment. She obtained Laurea diploma in February 2004 with a grade of 110/110 cum laude. (1998–2004) She received a University degree in Physics from Università degli Studi di Milano, Milan, Italy, with Major in solid-state physics and superconductivity. Her scientific skills include: Thin film growth, Research on high-temperature superconducting thin films and oxide materials: extensive experience in thin-film heteroepitaxial growth by pulsed laser deposition (excimer and Nd:YAG laser) and Electrochemical anodization of metals.

Dr. Vladimir N. Strocov graduated from St. Petersburg State University, Russia in 1986 and obtained his PhD degree there in 1990 with specialization in solid-state physics. His further experimental and theoretical research in a number of European institutions (Chalmers University of Technology, Sweden, University of Augsburg, Germany etc.) focused on photoelectron and very-low-energy electron diffraction spectroscopies applied to a wide range of solid-state systems ranging from bulk to nanomaterials. He obtained his habilitation degree in 2000 with the Institute for Analytic Instrumentation in St. Petersburg, Russia. His present activity at the Swiss Light Source since 2004 extends from the development of synchrotron radiation instrumentation to research on various bulk and nanostructure solid-state systems with different electron correlation strengths using soft X-ray photoelectron spectroscopy and related techniques. He has more than 125 publications in refereed journals and monographs, including 24 publications in Physical Review Letters, 6 in the Nature journals and 3 invited reviews, and has been a guest editor in a number of topical journal issues.