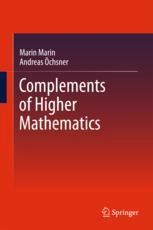 This book highlights the remarkable importance of special functions, operational calculus, and variational methods. A considerable portion of the book is dedicated to second-order partial differential equations, as they offer mathematical models of various phenomena in physics and engineering.

The book provides students and researchers with essential help on key mathematical topics, which are applied to a range of practical problems. These topics were chosen because, after teaching university courses for many years, the authors have found them to be essential, especially in the contexts of technology, engineering and economics. Given the diversity topics included in the book, the presentation of each is limited to the basic notions and results of the respective mathematical domain. Chapter 1 is devoted to complex functions. Here, much emphasis is placed on the theory of holomorphic functions, which facilitate the understanding of the role that the theory of functions of a complex variable plays in mathematical physics, especially in the modeling of plane problems.

In addition, the book demonstrates the importance of the theories of special functions, operational calculus, and variational calculus. In the last chapter, the authors discuss the basic elements of one of the most modern areas of mathematics, namely the theory of optimal control.

Andreas Öchsner is a Full Professor at the School of Engineering, Griffith University, Australia and Leader of the Mechanical Engineering Program (Head of Discipline and Program Director). Having obtained a Dipl.-Ing. degree in Aeronautical Engineering at the University of Stuttgart (1997), Germany, he served as a research and teaching assistant at the University of Erlangen-Nuremberg, Germany, from 1997 to 2003 while working to complete his Doctor of Engineering Sciences (Dr.-Ing.) degree. From 2003 to 2006, he was an Assistant Professor at the Department of Mechanical Engineering and Head of the Cellular Metals Group affiliated with the University of Aveiro, Portugal. He spent seven years (2007–2013) as a Full Professor at the Department of Applied Mechanics, Technical University of Malaysia, where he was also Head of the Advanced Materials and Structure Lab. His research interests are related to experimental and computational mechanics, cellular metals and thin structures and interphases. He has published over 420 scientific publications, comprising 13 research monographs, 21 book chapters and two teaching books on finite element methods. He is the general chairman of 11 international conferences on computational and experimental engineering and 13 international conferences in the area of heat and mass transfer. His editorial work includes posts as Editor-in-Chief of the international journal Continuum Mechanics and Thermodynamics, Editor-in-Chief of the Springer book series on Advanced Structured Materials, and Editor of SpringerBriefs in Applied Sciences and Technology: Computational Mechanics. His research activities were recognised in 2010 in the form of a higher doctorate degree (D.Sc.) awarded by the University of Newcastle, Australia.