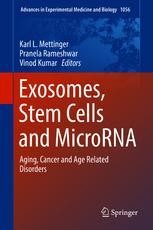 This volume provides insight into the pivotal roles of stem cells, exosomes and other microvesicles in biofunction and molecular mechanisms and their therapeutic potential in translational nanomedicine. It further highlights evidence from recent studies as to how stem cell derived exosomes and microRNAs may restore and maintain tissue homeostasis, enable cells to recover critical cellular functions and begin repair regeneration. These early studies in animal models of aging also show evidence of improved immune, cardiovascular and cognitive functions as well as improved health span and life span. The use of exosomes from body fluids to define specific biomarkers for various tumors may also clear the path to patient-targeted treatments by developing exosome-derived microRNA based cancer therapeutics. It is essential reading for graduate students, research fellow and biomedical researchers in academia or the pharmaceutical or biotech industries.

Dr. Karl Mettinger received his M.D. from the University of Lund in Sweden and his Ph.D. in in the field of Hematology/Neurology from Karolinska Institute/Karolinska University Hospital in Stockholm, where he served as Associate Professor of Neurology. He was a cofounder and President of the Swedish Stroke Society with currently over 10,000 members. He is currently President and CEO of Cellastra Inc.in San Francisco. For more than 30 years he has served as an executive in the life science industry including Kabi (Pharmacia), IVAX (TEVA), Supergen, Oncolytics Biotech and has been involved with the successful development and global regulatory approvals of new therapeutics in areas of oncology, hematology, cardiovascular and CNS. Dr. Mettinger is the Principal and Founder of Progressive Clinical Partners with the mission to help accelerate and facilitate approvals of novel therapeutics. His memberships include many academies and societies involving stem cells, neurology, and cancer including  International Society for Extracellular Vesicles (ISEV).

Dr. Pranela Rameshwar is a professor of Medicine, Division of Hematology and Oncology at the Rutgers New Jersey Medical School. She received a B.S. degree in medical microbiology from the University of Wisconsin at Madison and a Ph.D. in biology from Rutgers University, New Jersey, where she continued her training as a postdoctoral fellow. Her research interests involve the translation of stem cell, including their utility as vehicle for drug delivery, with emphasis on aging. Her laboratory also studies breast cancer dormancy with a focus on cancer stem cells; neural regulation of hematopoiesis and the immunology of adult human mesenchymal stem cells. Dr. Rameshwar has trained several doctoral and master degree students and directs graduate level courses in stem cell biology. In addition, she has authored >200 publications, and is the Editor in Chief of Breast Cancer – Targets and Therapy and Journal of Cancer Stem Cell Research. She is an active member of several grant review panels both nationally and internationally and has lectured extensively around the world.

Dr. Vinod Kumar, MD, trained in psychiatry at Birmingham University, Leicester University UK and UCLA, and became member of the NIA Consortium for the treatment of Alzheimer’s disease. His academic appointments included professor of psychiatry and neurology at the University of Illinois at Chicago and Professor of Psychiatry, University of Miami, where he served as assistant chairman and director of geriatric psychopharmacology. Subsequently he joined Novartis Pharmaceuticals as Global Executive Director Neuroscience and served as Section Head, Distinguished Investigator and Sr Global Program Medical Director Neuroscience. He supervised submissions of several NDA’s leading to successful approvals and launches. Dr Kumar is a well published author and was co-editor of a book on the Advances in Research and Treatment in Alzheimer’s disease (Springer). Dr Kumar served as Editor in Chief of the International Journal of Geriatric Psychopharmacology (Nature), and as an associate editor of International Journal of Alzheimer’s Disease.

“The book contains some basic introductory material that is useful for students/researchers who are new to this area of research, … concisely written and provide a useful collection of references for readers who want to delve into some of the topics in further detail. The excellent figures and summary tables throughout the book help readers to comprehend the material.” (Michael J. Fay, Doody's Book Reviews, May 24, 2019)