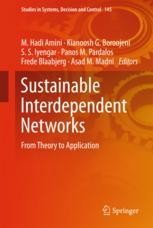 From Theory to Application

This book focuses on the theory and application of interdependent networks. The contributors consider the influential networks including power and energy networks, transportation networks, and social networks. The first part of the book provides the next generation sustainability framework as well as a comprehensive introduction of smart cities with special emphasis on energy, communication, data analytics and transportation. The second part offers solutions to performance and security challenges of developing interdependent networks in terms of networked control systems, scalable computation platforms, and dynamic social networks. The third part examines the role of electric vehicles in the future of sustainable interdependent networks. The fourth and last part of this volume addresses the promises of control and management techniques for the future power grids.

M. Hadi Amini, is currently a Ph.D. Candidate with the Department of Electrical and Computer Engineering, Carnegie Mellon University, Pittsburgh, PA, where he received the M.Sc. degree in Electrical and Computer Engineering in 2015. Prior to that, he received the B.Sc. degree from the Sharif University of Technology, Tehran, Iran, in 2011, and the M.Sc. degree from Tarbiat Modares University, Tehran, in 2013, both in Electrical Engineering. He serves as reviewer for several high impact journals, and international conferences and symposiums in the field of power systems. He has published more than 50 refereed journal and conference papers in the smart energy systems and transportation network related areas. He is the recipient of the best paper award of “Journal of Modern Power Systems and Clean Energy” in 2016, best reviewer award of “IEEE Transactions on Smart Grid” from the IEEE Power & Energy Society in 2017, outstanding reviewer award of “IEEE Transactions on Sustainable Energy” in 2017, and the dean’s honorary award from the president of Sharif University of Technology in 2007. He ranked 26th among about 270,000 participants in the Nationwide University Entrance Exam for B.Sc. degree in 2007. His current research interests include interdependent networks, distributed/decentralized optimization algorithms in energy systems, electric vehicles, and state estimation.

Kianoosh G. Boroojeni received PhD in computer science from Florida International University in 2017. He received his B.Sc degree from University of Tehran in 2012 and his M.Sc degree from Florida International University in 2016. His research interests include smart grids and cybersecurity. He is the author/co- author of three books published by MIT Press and Springer. During his PhD years, he has published more than thirty publications in the form of book chapters, peer-reviewed journal papers and conference papers. He is currently collaborating with Dr. S. S. Iyengar to study some network optimization and security problems in the context of smart urban development.

S.S. Iyengar is a leading researcher in the fields of distributed sensor networks, computational robotics, and oceanographic applications, and is perhaps best known for introducing novel data structures and algorithmic techniques for large scale computations in sensor technologies and image processing applications. He  is currently the Director and Ryder Professor at Florida International University's School of Computing and Information Sciences in Miami, FL. He has published more than 500 research papers and has authored or co-authored more than 12 textbooks and edited 10 others. Iyengar is a Member of the European Academy of Sciences, a Fellow of the Institute of Electrical  and  Electronics  Engineers (IEEE), a Fellow of National Academy of Inventors (NAI) a  Fellow  of  the Association  of  Computing Machinery  (ACM), a Fellow of the American Association for the Advancement of Science(AAAS), and Fellow of the Society for Design and Process Science (SDPS). He has received the Distinguished Alumnus Award of the Indian Institute of Science.

Panos Pardalos is a Distinguished Professor and the Paul and Heidi Brown Preeminent Professor in the Departments of Industrial and Systems Engineering at the University of Florida,  and a world renowned leader in Global Optimization, Energy Systems, Mathematical Modeling, and Data Sciences. He is a Fellow of AAAS, AIMBE, and INFORMS and was awarded the 2013 Constantin Caratheodory Prize of the International Society of Global Optimization. In addition, Dr. Pardalos has been awarded the 2013 EURO Gold Medal prize bestowed by the Association for European Operational Research Societies.  He is also a Member of the New York Academy of Sciences, the Lithuanian Academy of Sciences, the Royal Academy of Spain, and the National Academy of Sciences of Ukraine. He has published over 500 papers, edited/authored over 200 books and organized over 80 conferences. He has over 40,000 citations on his work, an H-index of 90 (Google Scholar) and has graduated 60 Ph. D. students so far.

Frede Blaabjerg was with ABB-Scandia, Randers, Denmark, from 1987 to 1988. From 1988 to 1992, he got the PhD degree in Electrical Engineering at Aalborg University in 1995. He became an Assistant Professor in 1992, an Associate Professor in 1996, and a Full Professor of power electronics and drives in 1998. From 2017 he became a Villum Investigator. He has published more than 500 journal papers in the fields of power electronics and its applications. He has received 24 IEEE Prize Paper Awards, the IEEE PELS Distinguished Service Award in 2009, the EPE-PEMC Council Award in 2010, the IEEE William E. Newell Power Electronics Award 2014 and the Villum Kann Rasmussen Research Award 2014. He was the Editor-in-Chief of the IEEE TRANSACTIONS ON POWER ELECTRONICS from 2006 to 2012. He is nominated in 2014, 2015, 2016 and 2017 by Thomson Reuters to be between the most 250 cited researchers in Engineering in the world. In 2017 he became Honoris Causa at University Politehnica Timisoara (UPT), Romania.

Asad M. Madni, served as President, COO & CTO of BEI Technologies Inc. from 1992 until his retirement in 2006. Prior to BEI he was with Systron Donner Corporation for 18 years in senior technical & executive positions, eventually as Chairman, President & CEO. He is currently, an Independent Consultant, Distinguished Adjunct Professor/ Distinguished Scientist at UCLA, Distinguished Professor at TCI College of Technology, Adjunct Professor at Ryerson University, and Executive Managing Director & CTO of Crocker Capital. He is credited with over 170 refereed publications, 69 issued or pending patents, and is the recipient of numerous national and international honors and awards including, Ellis Island Medal of Honor, IET (UK) J.J.Thomson Medal, IEEE Millennium Medal, TCI College Marconi Medal, UCLA Professional Achievement Medal, UCLA Engineering Alumnus of the Year Award, UCLA Engineering Lifetime Contribution Award, UCLA EE Distinguished Alumni Award, IEEE AESS Pioneer Award, IEEE HKN Eminent Member Award, IEEE IMS Career Excellence Award and Tau Beta Pi Distinguished Alumni Award. He is a member of the US National Academy of Engineering, a Fellow of the National Academy of Inventors, a Fellow/Eminent Engineer of 14 of the world’s most prestigious professional academies and societies, and has been awarded five honorary professorships.

“The presented topic is very promising due to the increasing interdependency among various real-world networks. As the pioneer book in this context, it is recommended to the researchers in the fields of electrical and computer engineering, computer science, civil engineering, and industrial engineering, as well as engineers.” (Prof. My Thai, Editor-in-Chief, Computational Social Networks;  UF Research Foundation Professor, Computer & Information Science & Engineering Department, University of Florida)

“This timely book will be invaluable in training the next generation of researchers who have to deal with critical issues related to sustainable interdependent networks and complex optimization challenges of smart power and electrified transportation networks.” (Prof. Aydogan Ozcan, Chancellor's Professor at University of California, Los Angeles (UCLA), USA)

"This book makes a groundbreaking contribution to the area of sustainable networks for several applications. It also provides a comprehensive vision of the smart cities. I highly recommend it for researchers who are seeking emerging challenges and the efficient solutions to solve them.” (Prof. Pierluigi Siano, Professor, University of Salerno, Italy; Editor-in-Chief, Journal of Smart Cities)

“This book presents an extremely valuable resource, the first of its kind, for engineers and scientists in addressing all critical aspects of sustainable interdependent networks in a well-organized and strategic manner.” (Prof. M. C. Frank Chang, President of the National Chiao Tung University, Taiwan)

“This timely book not only provides a theoretical foundation for the sustainability of interdependent networks, but also presents different real-world applications for such networks. It is recommended to experts from academia and industry.”(Prof. S. Butenko, Professor of Industrial and Systems Engineering, Texas A&M University; Editor-in-Chief, Journal of Global Optimization)