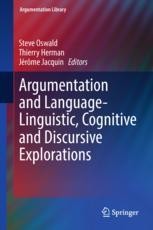 This volume focuses on the role language plays at all levels of the argumentation process. It explores the effects that specific linguistic choices may have in the production and the reception of arguments and in doing so, it moves beyond the first, necessary, descriptive stance provided by current literature on the topic. Each chapter provides an original take illuminating one or more of the following three issues: the range of linguistic resources language users draw on as they argue; how cognitive processes of meaning construction may influence argumentative practices; and which discursive devices can be used to fulfil a number of argumentative goals. The volume includes theoretical and empirical or applied stances, providing the reader both with state-of-the-art reflections on the relationship between argumentation and language, and with concrete examples of how this relationship plays out in naturally occurring argumentative practices, such as classroom interaction, and political, parliamentary or journalistic discourse.

This is a very original, timely and welcome contribution to the study of argumentation conducted with the tools of the language sciences. The collection of papers relevantly tackles key linguistic, discursive and cognitive aspects of argumentative practices whose treatment is underrepresented in mainstream argumentation studies by offering new and exciting linguistically-grounded theoretical accounts. As such, the volume testifies both to the vigour of the linguistic current within the discipline and to the high standards of scholarly commitment and quality that the younger generation is pushing forward. Without question, this book marks an important milestone in the relationships between linguistics and argumentation theory.

Steve OSWALD is a Senior Lecturer at the University of Fribourg, Switzerland. His research scopes over the fields of linguistics, pragmatics, argumentation theory and cognitive science, and his main area of investigation covers the interface between language and cognition in discourse. He has extensively worked on verbal deception and the rhetorical effectiveness of (fallacious) argumentation, integrating both phenomena in a cognitive pragmatic theory of verbal communication and complementing this theoretical import with empirical studies of media and political discourse. From a methodological perspective, his work has explored how a cognitive pragmatic model can be a powerful tool in the analysis of discourse, notably in what regards argument reconstruction. His latest research project is devoted to a theoretical and empirical exploration of the argumentative features of conspiracy theories and tries to interface extant research in cognitive and social psychology with more traditional philosophical approaches to conspiracy theories through an account of their typical argumentative profiling. He has co-edited a special issue of the Journal of Pragmatics with Didier Maillat (Elsevier, 2013), a collective volume with Thierry Herman, Rhetoric & Cognition (Peter Lang, 2014), contributed many chapters in edited books and also published his research in a number of other international outlets (Pragmatics & Cognition, Argumentation, International Review of Pragmatics, Discourse Studies among others).

Thierry HERMAN is an Associate Professor and Senior Lecturer at the Univeristies of Neuchâtel and Lausanne. He is also docente in the Institute for Argumentation and Language Studies at the Università della Svizzera italiana (Lugano). His research is focused on rhetoric and persuasion, considered from a linguistic and pragmatic frame. He has worked on political, journalistic and academic discourses, showing how the rhetorical frame (that is to say a social, discursive and cognitive frame) is useful to pinpoint persuasive strategies and fallacious arguments. He has also a deep interest in the link between argumentation theory and linguistics and many of his talks or publications are about structures of argumentation, argumentation from authority, explanation and argumentation, Toulmin’s layout of arguments. He has co-edited a collective volume with Steve Oswald, Rhetoric & Cognition (Peter Lang, 2014) and contributed many chapters in edited books. He has mainly published in French outlets (Argumentation et Analyse de discours, Semen, Communication et Langage, among others) and will be publishing an online book of tools for rhetorical analysis of texts during 2016-2017. He has co-founded a research group gathering scholars interested by argumentation in Switzerland (CoRReA) with Jérôme Jacquin, Steve Oswald and Raphaël Micheli.

Jérôme JACQUIN is a Lecturer in the Departments of French Linguistics and Language & Information Sciences at the University of Lausanne, Switzerland. He is also a Research Associate in the “Language in the Workplace” project at the Victoria University of Wellington, New Zealand, where he has been invited as Visiting Scholar and funded by the Swiss National Science Foundation [P2LAP1_155110]. His research draws on insights and methods from Interactional Linguistics and Multimodal Conversation Analysis to investigatehow verbal practices are multimodally accomplished and interpreted in ordinary, professional, and institutional settings. He has been focusing primarily on argumentation and stancetaking in political debates and workplace meetings, with a particular interest in the expression of disagreement and decision-making processes. He is currently working on embodied deixis in argumentation. He has published a book and co-edited two collective volumes (De Boeck, 2011, 2014, and 2015) and a special issue of the Journal of the Swiss Association for Applied Linguistics (2015). He has also published his research in a number of chapters of edited volumes and international outlets (Discourse & Communication, Digital Scholarship in the Humanities, Journal of the Swiss Association for Applied Linguistics, Semen, Mots, Langue Française, among others).