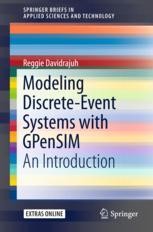 Modeling Discrete-Event Systems with GPenSIM describes the design and applications of General Purpose Petri Net Simulator (GPenSIM), which is a software tool for modeling, simulation, and performance analysis of discrete-event systems. The brief explains the principles of modelling discrete-event systems, as well as the design and applications of GPenSIM. It is based on the author’s lectures that were given on “modeling, simulation, and performance analysis of discrete event systems”.

The brief uses GPenSIM to enable the efficient modeling of complex and large-scale discrete-event systems. GPenSIM, which is based on MATLAB®, is designed to allow easy integration of Petri net models with a vast number of toolboxes that are available on the MATLAB®. The book offers an approach for developing models that can interact with the external environment; this will help readers to solve problems in industrial diverse fields. These problems include:

This brief is of interest to researchers working on the modeling, simulation and performance evaluation of discrete-event systems, as it shows them the design and applications of an efficient modeling package. Since the book also explains the basic principles of modeling discrete-event systems in a step-by-step manner, it is also of interest to final-year undergraduate and postgraduate students.

Reggie Davidrajuh has a Bachelor study in Physics, a Master degree in Control Systems, and a PhD in Industrial Engineering. Also, he has a DSc (habilitation) degree in Informatics. At present, he is a full professor of Electrical and Computer Engineering at the University of Stavanger, Norway, and holds a visiting professor position at the Silesian University of Technology, Poland.

Dr. Davidrajuh is the editor of the journal "International Journal of Business and Systems Research".  In addition, he serves on the editorial committees of many journals that include "Expert Systems with Applications" (Elsevier) and "Archives of Control Sciences" (a Quarterly of Polish Academy of Sciences). Dr. Davidrajuh has published over 100 publications in the diverse areas such as supply chain, e-commerce, e-government, modeling and simulation, discrete event systems, green power generation, etc. His paper on “Modeling humanoid robot as a discrete event system” won the best paper award at the Asia Modeling Symposium (AMS2015), in Dec 2015, in Kuala Lumpur. In addition, his paper on “GPenSIM for Performance Evaluation of Event Graphs” also won the best paper award at the International Scientific and Technical conference on Manufacturing (Manufacturing 2017), in October 2017, in Poznan, Poland. He has organized more than 50 international conferences and has given keynote speeches in three conferences. His current research interests are “Modeling, simulation, and performance analysis of discrete-event systems”, and algorithms and graph theory. He is a senior member of IEEE and a Fellow of British Computer Society.

“It offers a guided tour of GPenSim’s features, emphasizing its generality and extensibility. … The book includes 38 detailed examples illustrating the functions of the program. Together with the program, it provides a very accessible laboratory to support courses or self-study based on one of the classical texts on Petri nets and discrete event modeling.” (H. Van Dyke Parunak, Computing Reviews, March 25, 2019)