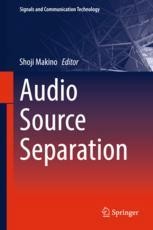 The book brings together leading researchers to provide tutorial-like and in-depth treatments on major audio source separation topics, with the objective of becoming the definitive source for a comprehensive, authoritative, and accessible treatment. This book is written for graduate students and researchers who are interested in audio source separation techniques based on NMF, DNN and SCA.

SHOJI MAKINO (F) received the B. E., M. E., and Ph.D. degrees from Tohoku University, Japan, in 1979, 1981, and 1993, respectively. He joined NTT in 1981. He is now a Professor at University of Tsukuba. His research interests include adaptive filtering technologies, realization of acoustic echo cancellation, blind source separation of convolutive mixtures of speech, and acoustic signal processing for speech and audio applications.

Dr. Makino received the IEEE SPS Best Paper Award in 2014, the IEEE MLSP Competition Award in 2007, the ICA Unsupervised Learning Pioneer Award in 2006, the Commendation for Science and Technology of Japanese Government in 2015, the TELECOM System Technology Award in 2015 and 2004, the Achievement Award of the Institute of Electronics, Information, and Communication Engineers (IEICE) in 1997, and the Outstanding Technological Development Award of the Acoustical Society of Japan (ASJ) in 1995, the Paper Award of the IEICE in 2005 and 2002, the Paper Award of the ASJ in 2005 and 2002. He is the author or co-author of more than 200 articles in journals and conference proceedings and is responsible for more than 150 patents. He was a Keynote Speaker at ICA2007 and a Tutorial speaker at EMBC 2013, Interspeech 2011 and ICASSP 2007.

Dr. Makino is an IEEE Fellow, an IEICE Fellow, a Board member of the ASJ, and a member of EURASIP and ISCA.