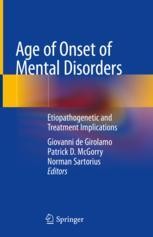 Age of Onset of Mental Disorders

This book presents a thorough and critical review of current  knowledge about  the age of onset of mental disorders. The opening chapters offer information about the impact of the age of onset on the clinical picture, course, and outcome of physical illnesses, and about  the neurobiological implications and correlates of different ages of onset. The impact and correlates of the ages of onset of all the most important mental disorders are then discussed in detail by internationally renowned scientists. The background to the book is the recognition that a better understanding of age of onset makes it possible to estimate the lifetime risk of disorders, helps to elucidate pathogenesis, and facilitates efficient, targeted clinical management. The book will be of value for clinicians, mental health professionals, mental health researchers, epidemiologists, and different stakeholders in the mental health field.

Giovanni de Girolamo, M.D., leads the Psychiatric Epidemiology and Evaluation Unit at the IRCCS St. John of God Clinical Research Centre, Brescia (Italy), and is a Professor at the Faculty of Psychology at the Catholic University of the Sacred Heart, Milan (Italy). From 1988 to 1994 he was an Associate Professional Officer at the Division of Mental Health, World Health Organization, Geneva; after his return to Italy, he has worked at the Italian N.I.H. in Rome and at the Department of Mental Health in Bologna. He has been a principal investigator for a range of studies covering  a variety of mental health areas, and has been the PI of the Italian site participating to the World Mental Health Survey Initiative. He is currently the principal investigator for the Italian site of the European projects “THE MILESTONE PROJECT: Managing the Link and Strengthening Transition from Child to Adult Mental Health Care” and RADAR-CNS. Prof. de Girolamo has published more than 250 papers and authored or co-authored several books and book chapters.

Norman Sartorius was the Director of the Division of Mental Health at the World Health Organization (WHO) and subsequently President of the World Psychiatric Association (WPA) and then  President of the Association of European Psychiatrists). He is currently President of the Association for the Improvement of Mental Health Programmes and a member of the Geneva Prize Foundation, having previously been its President. Professor Sartorius was professor of psychiatry at the University of Geneva and now holds professorial appointments at the Universities of London and Zagreb and at several other universities in the USA and China. He has published more than 400 articles in scientific journals, authored or co-authored a number of books and edited many others. He is an honorary fellow of the Royal College of Psychiatrists of the United Kingdom, of the American College of Psychiatry, of the Royal Australian and New Zealand College of Psychiatrists and of numerous other professional associations. He is also a Distinguished Fellow of the American Psychiatric Association and honorary member of medical academies in Peru, Mexico and Croatia and holds honorary doctorates from universities in the Cheech Republic, Denmark, Romania, Sweden and the UK. He is also a chief editor of  Current Opinion in Psychiatry and a member of the editorial boards of a number of scientific journals.

Patrick McGorry is a Professor of Youth Mental Health at the University of Melbourne, and Executive Director of Orygen, the National Centre of Excellence in Youth Mental Health. He is also President of the Society for Mental Health Research in Australia, President of the Schizophrenia International Research Society, and a founding member and Treasurer of the International Early Psychosis Association (IEPA). Leading researcher and innovator in early intervention for emerging mental illness in young people , Prof. McGorry has authored or co-authored over 300 peer-reviewed articles, more than 50 book chapters and 6 books. He currently serves as Editor in Chief of the journal Early Intervention in Psychiatry, and on the Editorial Board of Schizophrenia Research.
Show all