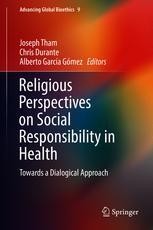 Towards a Dialogical Approach

This book discuss the meaning and implications of the social and ethical implications of the notion of social responsibility in healthcare in six major world religions — Buddhism, Christianity, Confucianism, Hinduism, Islam, & Judaism. This collection of papers is based on a four-day workshop where bioethics experts from various religious traditions gathered. They discussed the ways in which their respective traditions could, or could not, uphold the tenets of Article 14 of UNESCO's Universal Declaration of bioethics and Human Rights. The different papers presented in this book are based on this interchange of ideas at the workshop. The book explores the potential points of convergence among the various perspectives presented, as well as a discussion on the ways in which their moral differences may be managed. The managing of these moral differences through international socio-ethical mechanisms, contributes significantly to the UNESCO Universal Declaration of Bioethics and Human Rights’ goal of simultaneously respecting religio-cultural pluralism while upholding a commitment to human rights.

Joseph Tham was born in Hong Kong and immigrated to Canada at the age of fifteen.  At the University of Toronto, he first majored in Mathematical Sciences and then graduated from Medical School.  After several years of work as a family physician, he entered the seminary of the Legionaries of Christ and was ordained a priest in 2004.  As a part of this preparation, he has obtained his degrees in philosophy and theology at Rome’s Regina Apostolorum Pontifical university, where he also completed his post-graduate studies in bioethics.  He successfully defended his doctoral dissertation with high honors on “The Secularization of Bioethics—A Critical History” under the direction of Dr. Edmund Pellegrino, former Chairman of the President’s Council on Bioethics.  He presently teaches bioethics in Regina Apostolorum and was formerly the Dean of the School of Bioethics.  He is the editorial coordinator of Studia Bioethica and a Fellow of the UNESCO Chair in Bioethics and Human Rights.

Alberto GARCÍA GÓMEZ is the director of the UNESCO Chair in Bioethics and Human Rights (Rome, Italy). He graduated in Law at Autonomous University Law School and is a Doctor in Law from Complutense University in Madrid. Presently, he is Professor of Philosophy of Law and International Law at the School of Bioethics of Athenaeum Pontificium Regina Apostolorum in Rome. Furthermore he is a researcher of the Human Rights Institute at Complutense University. For 5 years he has been member of the Steering Committee of Bioethics in the Council of Europe and in 2005 he has been honoured with the National Prize of the Spanish Royal Academy of Doctors in the field of legal and social sciences.

Chris Durante is an Assistant Professor in the Department of Theology at Saint Peter’s University in NJ as well as a Fellow of the UNESCO Chair in Bioethics & Human Rights, where he serves as the Academic Coordinator of the Bioethics, Multiculturalism & Religion workshops. Dr. Durante holds a Ph.D. from the Faculty of Religious Studies at McGill University, a M.A. in Religious Studies from Georgia State University, a M.Sc. in Philosophy of Mental Disorder from King’s College London and a B.A. in Philosophy from Fordham University. His primary research and teaching interests are in Religion, Ethics & Society broadly construed to include: Bioethics, Comparative Religious Ethics, Religion & Politics, Moral Theology and Moral Philosophy. His publications have appeared in a number of academic journals such as: the American Journal of Bioethics; the Journal of Medical Ethics; Medicine, Healthcare and Philosophy; the Journal of Global Ethics; the Journal of Religious Ethics; and the Journal of Church & State.