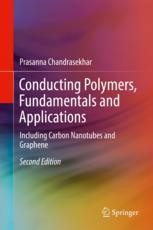 Including Carbon Nanotubes and Graphene

The second edition of this popular textbook thoroughly covers the practical basics and applications of conducting polymers. It also addresses materials that have gained prominence since the first edition of this book was published, namely carbon nanotubes and graphene.
The features of this new edition include:

An in depth description of classes of conducting polymers

Prasanna Chandrasekhar received his B.Sc. (Honors) in Chemistry from the University of Delhi, Delhi, India in 1978, his M.Sc. in Inorganic Chemistry/X-Ray-Crystallography from Concordia University, Montréal, Canada in 1980, and his Ph.D. in Electro-analytical Chemistry from the State University of New York (SUNY) at Buffalo, Buffalo, New York, USA in 1984. He was a postdoctoral associate at the Department of Chemistry and Materials Science Center, Cornell University, Ithaca, New York, USA in 1984-5, and a Senior Research Scientist at Honeywell, Inc. in Minneapolis, Minnesota, USA and Horsham, Pennsylvania, USA from 1985-1987. From 1987-1992, he was Manager of Electrochemical Programs at Gumbs Associates, Inc., East Brunswick, New Jersey, USA.Dr. Chandrasekhar founded Ashwin-Ushas Corporation in October 1992, and has been President, CEO and sole owner there since. Ashwin-Ushas Corporation is a research company active in the defense and aerospace fields that has pioneered technologies based on Conducting Polymers (CPs), including IR-region electrochromics for terrestrial military camouflage, variable-emittance skins for spacecraft thermal control, visible-region electrochromics for safety and sunwear, and, most recently, voltammetric electrochemical sensors for chemical warfare agents.  Dr. Chandrasekhar is the author or co-author of over 100 peer-reviewed publications and a large portfolio of worldwide patents.Dr. Chandrasekhar’s other interests include music, ancient history, archaeology, linguistics and languages. He is the author of NAVLIPI, a universal alphabet published and patented in 2012 and applicable to all the world’s languages. This claims to be the first truly phonemic script in the world. He is also the author of several forthcoming books, including a primer of Sanskrit directed specifically to students of western classical languages (ancient Greek, Latin) and a summary compendium of ancient Hindu philosophy.