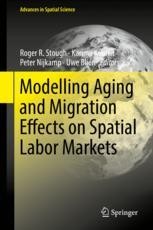 The aging and migration megatrends and their impact on spatial – regional and local  –  labor market performance is the core theme of this book, and thus together define its scope and focus. The contributions provide an overview of key aging and migration issues in various countries together with analyses of their varied impacts on regional labor markets. Systematic database research and related empirical analyses are used to map out the complex and dynamic nature of these trends, while cutting-edge economic and modeling techniques are used to analyze them. In closing, the book critically reviews and assesses selected policy measures designed to cope with the effects of aging and migration on regional labor markets.

Uwe Blien is Professor at the Otto Friedrich University in Bamberg, Head of the Department of Regional Labour Markets at the Institute for Employment Research (IAB), Fellow of the Labor and Socio-Economic Research Center (LASER) within the Friedrich-Alexander-University of Erlangen-Nuremberg, and Research Fellow of the Institute of Labor Economics (IZA) in Bonn. He received a Doctor in economics from the University of Regensburg and a habilitation (postdoctoral degree) from the Technical University of Kaiserslautern. From 2010 to 2014 he was President of the "Gesellschaft für Regionalforschung" (GfR), the German-speaking section of the European Regional Science Association (ERSA) and he was a member of the ERSA Council. Uwe Blien’s research interests concern among others regional labour markets, the effects of technical progress on labour markets, the effects of labour market policy, and the development of South-East Asian societies. He has published over 50 articles in refereed journals and 14 books (including edited volumes), and written over 100 book chapters and articles in other journals. In Germany he has done manifold consulting work for the Federal Ministry of Labour and Social Affairs, the Federal Employment Services and for other official institutions (also in other countries).

Karima Kourtit is at the Jheronimus Academy of Data Science (JADS) of the division Smart Cities, at the Eindhoven University of Technology and  Tilburg University, ‘s-Hertogenbosch, The Netherlands. She has worked at the Center for the Future of Places (CFP) of the Department of Urban Planning and Environment, School of Architecture and Built Environment at KTH Royal Institute of Technology, Stockholm and Adam Mickiewicz University, Poznan, Poland. She holds Ph.D.s in both economics and geography (with distinction) and has a profound interest in regional and urban topics. Her research interest focuses on the emerging ‘New Urban World’. Her main scientific research is in the field of creative industries, urban development, cultural heritage, digital technology, and strategic performance management. Lately, she has been involved in the implementation of national and international research projects and initiatives. Furthermore, she has been involved as an editor of several books and guest editor for many international journals, and has published a wide array of scientific papers, articles, special issues of journals and edited volumes in the field of geography and the spatial sciences.

Peter Nijkamp is emeritus Professor in regional and urban economics and in economic geography at the VU University, and connected to the Jheronimus Academy of Data Science (JADS) of the division Smart Cities (‘s-Hertogenbosch, The Netherlands), Royal Institute of Technology (KTH), Stockholm (Sweden) and A. Mickiewicz University, Poznan (Poland). He is member of editorial/advisory boards of more than 30 journals. According to the RePec list he belongs to the top-30 of well-known economists world-wide. He is also a fellow of the Royal Netherlands Academy of Sciences, and past vice-president of this organization. He has served as president of the governing board of the Netherlands Research Council (NWO). In 1996, he was awarded the most prestigious scientific prize in the Netherlands, the Spinoza award.

Roger R. Stough is in the Schar School of Policy and Government at George Mason University, USA. His research specializations include innovation and entrepreneurship as drivers of economic develop, leadership in regional economic development, economic modeling and transport analysis. During the past two decades Dr. Stough has been heavily involved in development related research in China, Korea, India, Pakistan, Turkey and Europe. More recently he has been involved in the development and application of indexes to measure and evaluate regional innovation and entrepreneurship ecosystems. During his Presidency of the Technopolicy Network in Europe he was involved in the development of an index designed to measure and evaluate innovation levels and processes. Further, he has advised officials in Turkey on the adoption of open innovation processes and management of intellectual property. In China, he has evaluated and advised various innovation policies at the sub-national regional level concerning the Torch, Technology Incubation, Innovation parks. His publication record includes several hundred scholarly and professional publications and 43 books (including edited volumes).