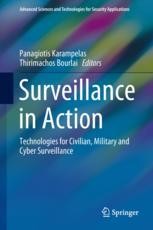 This book addresses surveillance in action-related applications, and presents novel research on military, civil and cyber surveillance from an international team of experts. The first part of the book, Surveillance of Human Features, reviews surveillance systems that use biometric technologies. It discusses various novel approaches to areas including gait recognition, face-based physiology-assisted recognition, face recognition in the visible and infrared bands, and cross-spectral iris recognition.

The last part of the book, Cyber Surveillance, provides a review of data hiding techniques that are used to hinder electronic surveillance. It subsequently presents methods for collecting and analyzing information from social media sites and discusses techniques for detecting internal and external threats posed by various individuals (such as spammers, cyber-criminals, suspicious users or extremists in general). The book concludes by examining how high-performance computing environments can be exploited by malicious users, and what surveillance methods need to be put in place to protect these valuable infrastructures.

The book is primarily intended for military and law enforcement personnel who use surveillance-related technologies, as well as researchers, Master’s and Ph.D. students who are interested in learning about the latest advances in military, civilian and cyber surveillance.

Panagiotis Karampelas holds a Ph.D. in Electronic Engineering from the University of Kent at Canterbury, UK and a Master of Science degree from the Department of Informatics, Kapodistrian University of Athens with specialization in “High Performance Algorithms”. He also holds a Bachelor degree in Mathematics from the same University majoring in Applied Mathematics. He has worked for 3 years as an associate researcher in the Foundation for Research and Technology-Hellas (FORTH), Institute of Computer Science. During this collaboration, he had the opportunity to work in numerous European funded research projects in the area of Information Society Technologies Programme practicing his expertise in User Interface Design, Usability Evaluation and Programming. He has also worked for several years as a user interface designer and usability expert in several IT companies designing and implementing large-scale research and commercial information systems. Among others he collaborated with Hellenic Army, General Staff, Signal Directorate as Studies and Research Officer, IntelliSolutions, Greece as Senior Developer implementing large-scale information systems in Vodafone Greece, General Bank of Greece, Microsoft, etc. Then he joined Hellenic American University as Assistant Professor teaching human computer interaction, programming, managing information systems and database management in the Graduate and Undergraduate programs. In parallel, he was visiting the School of Pedagogical and Technological Education, Greece as Assistant Professor teaching courses at the Department of Electrical and Electronic Engineering Educators. Currently, he is with the Department of Informatics and Computers, at the Hellenic Air Force Academy teaching courses to pilots and engineers.

His areas of interest include Human Computer Interaction, Information Visualization, Data Mining, Social Network Analysis, Counterterrorism Informatics, Power Management System, Artificial Neural Networks, Power Transmission and Distribution Systems. He has published a number of books and research articles in his major areas of interests in international journals and conferences. He is the author of the book “Techniques and Tools for Designing an Online Social Network Platform” published in Lecture Notes in Social Networks (2013) and one of the Editors in the book “Electricity Distribution - Intelligent Solutions for Electricity Transmission and Distribution Networks” in the Book Series Energy Systems (2016). He is also a contributor to the Encyclopedia of Social Network Analysis and Mining. He serves as a Series Editor in the Book Series Advanced Sciences and Technologies for Security Applications and as an Associate Editor in the Social Network Analysis and Mining journal. He also serves as program committee member in a large number of scientific journals and international conferences in his fields of interests. He is also member of the Advisory Board and organizer of the European Intelligence and Security Informatics Conference (EISIC) and participates in the Organizing Committee of the IEEE/ACM International Conference on Advances in Social Networks Analysis and Mining (ASONAM).

Thirimachos Bourlai is an associate professor in the Lane Department of Computer Science and Engineering at WVU. He also serves as an adjunct assistant professor in the WVU School of Medicine, Department of Ophthalmology, and the Department of Forensic and Investigative Science. He is the founder and director of the Multi-Spectral Imagery Lab at WVU. After earning his Ph.D. in face recognition and completing a post-doctoral appointment at the University of Surrey (U.K.), Bourlai completed a second post-doc in a joint project between Methodist Hospital and the University of Houston, in the fields of thermal imaging and human-based computational physiology. He joined the staff at WVU in 2009 serving as a visiting professor and later as a research assistant professor in the Lane Department. Bourlai served and has been invited to serve as chair at a number of biometrics conferences including ICB, BTAS, IJCB, FG, SPIE, ISS World Americas, IDGA, ACI and the Biometrics Institute. He has served as a member on technical program committees for other primary computer vision- and biometrics-focused conferences. Several governmental agencies, organizations and academic institutions have invited Bourlai to present his work, including the CIA, NSA, U.S. Secret Service, U.S. Army (various divisions), FBI, Amazon, SRC, Biometrics Institute, NLETS, IDGA, the Biometrics Summit Conference, the IEEE Signal Processing Society, University of Notre Dame, University of Pittsburgh, Rutgers University and the University of Newcastle (UK). He is also a reviewer for a number of premier journals in computer vision, biometrics and related areas (i.e., TPAMI, TIFS, IJCV, TCSVT, PRL, TIP, MVA). The primary focus of Bourlai’s research is on designing and developing technology for supporting, confirming and determining human identity in challenging conditions using primarily face images, captured across the imaging spectrum (including ultraviolet, visible, near-infrared, short-wave IR, mid-wave IR and long-wave IR) and secondarily, other hard or soft biometrics including iris, fingerprints, ears and tattoos. Additionally, he has worked on liveness detection problems using face and pupil dynamics; mobile biometrics; multi-spectral eye and pupil detection; and matching mugshots from government ID documents (e.g. passports or driver’s licenses) to live face images, which includes the development of image restoration techniques to recover the original mugshot behind the watermarks. Bourlai has collaborated with experts from academia, industry and the government on projects that involve the collection of various biometric data (including multi-spectral face images, irises and tattoos) and the design and development of biometric- and forensic-based algorithms that can support law enforcement and military operations.
Show all