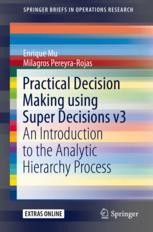 An Introduction to the Analytic Hierarchy Process

This book offers a simple introduction to the theory and practice of the Analytic Hierarchy Process (AHP) without a pre-requisite for a sophisticated mathematical background. AHP is an intuitive and mathematically simple methodology in the field of multi-criteria decision making in Operational Research (OR). Using Super Decisions v3, the newly developed software by the Creative Decisions Foundations, this book provides a quick and intuitive understanding of AHP using spreadsheet examples and step-by-step software instructions. Super Decisions v3 marks a drastic departure from the previous version 2 in terms of interface and ratings model development. In addition to a concise guide, instructional videos are also available to demonstrate how to use the different features of Super Decisions v3. Most AHP books assume the reader has basic OR mathematical background; however, AHP was developed with the goal that decision makers can take advantage of this methodology without struggling with the mathematics behind it. For this reason, only basic arithmetic knowledge is required from the readers. In conclusion, this book delivers a quick and practical understanding of the AHP methodology that can be useful for corporate executives and decision-makers in all fields.

​Enrique Mu, Co-Chair of the MBA program at Carlow University, is an accomplished scholar and seasoned businessman. He holds a PhD in Business Administration with a concentration in Information Systems from the University of Pittsburgh where he is an associate of the University Center for International Studies. Prior to joining Carlow, he was dual-degree MBA/MIS program director in the Joseph M. Katz Graduate School of Business at the University of Pittsburgh, where he taught for 10 years. Prior to joining the academia, Dr. Mu was responsible for sales and marketing distribution operations in Latin America for a U.S.-based global data communication corporation. He also worked as customer support vice president and senior project manager for Comlasa Ltd., a computing solution multinational firm (later acquired by UPS Logistics) for the Latin American banking industry. There, he led several multimillion-dollar banking automation projects in Peru, Colombia, Venezuela, and Chile. In addition to his activities in the U.S., he also regularly teaches and gives business presentations in Europe and Latin America. Dr. Mu was visiting faculty in the European Business School in Germany where he taught for several years. His main areas of interest are the management of IT innovations, managerial decision making, and the interplay of politics and technology. He is also founder and editor in chief of the International Journal of the Analytic Hierarchy Process.
Milagros Pereyra-Rojas has been executive director for the Latin American Studies Association (LASA) at the University of Pittsburg since 2003. She has been a research associate at Case Western Reserve University and President of MaestroMeetings Inc. She graduated from the Weatherhead School of Management at Case Western Reserve University with a Ph.D. in Management (Designing Sustainable Systems). She also holds an M.S. in public policy and management, with a concentration on finance and information technology, from Carnegie Mellon University; and an M.S. in management and technology, as well as a B.S./B.A from Carlow University, Pittsburgh, PA. She is originally from Peru where she worked as a TV journalist, having had the opportunity to meet and interview key Peruvian political figures. She also worked for La Casa de la Mujer—a non-profit organization that promotes the rights of underprivileged women. She started working for LASA as assistant director for information systems and communications in 2000. During her tenure at LASA, she has been responsible for the implementation of several technological initiatives such as on-line membership, professional searchable database, and on-line proposal submission. Pereyra was instrumental during the transfer of the Latin American Research Review (LARR) – the flagship journal of LASA from a University Press to self-publishing. She has also re-structured the organization and administrative processes which, in combination with the upgraded technical infrastructure, has made LASA one of the most efficient non-profit organizations of its kind.