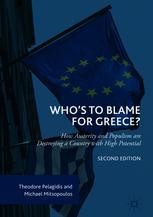 Who’s to Blame for Greece?

How Austerity and Populism are Destroying a Country with High Potential

Praise for the first edition:

'The new book by Michael Mitsopoulos and Theodore Pelagidis offers insightful analysis of the Greek drama. It makes fascinating reading and well demonstrates that the blame is widely shared.'

'Who is to blame for Greece? If I could pick just two experts on the Greek debacle to answer this question it would be Theodore Pelagidis and Michael Mitsopoulos. And thankfully they have done just that in this penetrating analysis of what has happened to Greece over the past five years. It's a timely and incisive work and no one gets off easy a must read.'

This expanded and enlarged second edition of Theodore Pelagidis and Michael Mitsopoulos’ popular Who’s to Blame for Greece? (2016) reviews Greece's economy since its accession to the Monetary Union, with new research focusing on the perils of the populist Syrizia government during the critical 'Grexit' period of 2015-2016.

The authors also focus on political developments since that time and in particular propose a new form of taxation as well as explore debt sustainability in relation to Greece's economic challenges. This book will appeal to researchers, practitioners and policy makers interested in the EU and the political economy of Greece and offers valuable updates on the first edition.

Theodore Pelagidis is a non-resident senior fellow at the Brookings Institution, USA, and Professor of Economics at the University of Piraeus, Greece. He has also been a NATO scholar at the Center for European Studies at Harvard University, USA; an NBG fellow at the London School of Economics, UK; and a Fulbright professorial fellow at Columbia University, USA. He has served as an expert to the International Monetary Fund in the Internal Evaluation Office, USA.

Michael Mitsopoulos is an economist at the Hellenic Federation of Enterprises, Greece. He holds a PhD in Economics from Boston University, USA and has taught at the University of Piraeus and the Economic University of Athens, Greece. He has published extensively in academic journals and is the co-author with Pelagidis of Understanding the Crisis in Greece: From Boom to Bust (Palgrave, 2011) and of Greece: From Exit to Recovery? (2014).

Book Title
Who’s to Blame for Greece?
Book Subtitle
How Austerity and Populism are Destroying a Country with High Potential
Authors
Copyright
2017
Publisher
Palgrave Macmillan
Copyright Holder
The Editor(s) (if applicable) and The Author(s)