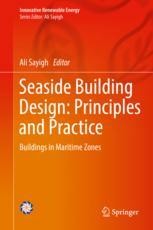 This one of a kind reference gathers numerous new studies examining the design of buildings in seaside locations. Chapters discuss design for various locations and seaside climates and include information regarding climate, materials, concepts of cooling and heating, vegetation and micro-climate, and weather conditions and sustainability. This book provides architects, engineers, builders, and students with design examples and applications that will enable them to design and build comfortable, cost-effective and sustainable buildings in maritime zones.

Prof Sayigh taught in Iraq, Saudi Arabia, Kuwait, Reading University and University of Hertfordshire From 1966 – 2004. He was Head of Energy Department at Kuwait Institute for Scientific Research (KISR) and Expert in renewable energy at AOPEC, Kuwait from 1981-1985.

He started working in solar energy in September 1969. In 1972, he established “The Journal of Engineering Sciences” in Riyadh, Saudi Arabia and in 1984 he established International Journal for Solar and Wind Technology, as an Editor-in-Chief. This has changed its name in1990 to Journal of Renewable Energy. He was the editor-in-chief from 1990 until 2014. He is editor of several International journal published i

He was consultants to many national and international organizations, among them, the British Council, ISESCO, UNESCO, UNDP, ESCWA, & UNIDO. He ran conferences in 51 different countries, published more than 600 papers and associated in 60 books. He supervised more than 80 M.Sc. and 35 Ph.D. students. He is editor-in-chief of famous Renewable Energy Magazine, RE and the year, since 2000.

He is the Editor-in-chief of Comprehensive Renewable Energy coordinating 154 top scientists, Engineers and researchers’ contribution in eight volumes published in 2012 by Elsevier which won 2013 PROSE award in USA. He is the founder of Med Green Forum and in 2016 he set up peer review international open access journal called “Renewable Energy and Environmental Sustainability” which is published in English on line by EDP publisher in Paris. He was one of the organizers of UN World Energy Forum in Dubai in charge of Renewable Energy section in 2012. He Run Symposium in Trieste Centre for theoretical Physics from 1977-1999 including UNESCO Forum in Energy in 1997. He is Chairman of Iraq Energy Institute since 2010
Show all