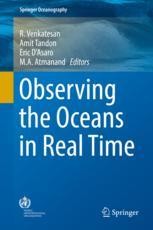 Observing the Oceans in Real Time

This book provides contributions from leading experts on the integration of novel sensing technologies to yield unprecedented observations of coupled biological, chemical, and physical processes in the ocean from the macro to micro scale. Authoritative entries from experts around the globe provide first-hand information for oceanographers and researchers looking for solutions to measurement problems.
Ocean observational techniques have seen rapid advances in the last few years and this book addresses the need for a single overview of present and future trends in near real time and real time. First the past, present and future scenarios of ocean observational tools and techniques are elucidated. Then this book divides into three modes of ocean observations: surface, upper ocean and deep ocean. This is followed by data quality and modelling.
Collecting a summary of methods and applications, this book provides first-hand information for oceanographers and researchers looking for solutions to measurement problems. This book is also suitable for final year undergraduate students or beginning graduate students in ocean engineering, oceanography and various other engineering students (such as Mechanical, Civil, Electrical, and Bioengineering) who are interested in specializing their skills towards modern measurements of the ocean.

R. Venkatesan is a Scientist G at the National Institute of Ocean Technology, Ministry of Earth Sciences, India and served under the UNEP Regional Seas Program. He received a MTech from Karnataka Regional Engineering College and a Ph.D. from the Indian Institute of Science, India and completed course in Marine Environmental Pollution & Management. He is working on ocean observations and is also teaching Ocean Policy and Ocean observation tools as an Adjunct faculty. He has evolved and executed societal relevant projects and supports Students. He is honoured by MTS Lockheed Martin award and National Geoscience award; Serving as a Member of Steering Committee of GOOS/UNESCO/IOC, DOOS, OceanSITES; Chair of International Tsunameter Partnership, IEEE-OES India and founder Chairman of MTS India.

Amit Tandon is a Professor at the College of Engineering and the School of Marine Science and Technology at UMass Dartmouth. After obtaining his PhD from Cornell University in 1992, Tandon was a UCAR postdoctoral fellow in Ocean Modeling, and in Climate System Modeling. Tandon, a Fulbright awardee and a Fulbright specialist, is a physical oceanographer whose research involves upper ocean dynamics, from mixing at microscales and Langmuir cells to frontal sub-mesoscale and mesoscale processes in the ocean, and their impact on air-sea interaction and the large-scale ocean circulation. His current research involves investigating the role of these sub-grid processes in global oceans.

Eric Arthur D’Asaro is a Senior Principal Oceanographer at the Applied Physics Laboratory, University of Washington and a Professor of Oceanography at the University of Washington.  He received a M.S. in Applied Physics from Harvard University and a Ph.D. from the joint program in Oceanography of the Woods Hole Oceanographic Institution and the Massachusetts Institute of Technology. He received the Sverdrup Gold Medal of the American Meteorological Society for pioneering instrumental, observational, and analytical progress in understanding upper ocean responses to atmospheric forcing, is a fellow of the American Geophysical Union and a member of the National Academy of Sciences.

M.A. Atmanand, Former Director of  National Institute of Ocean Technology, Ministry of Earth Sciences, India has  received his M.Tech and Ph. D. from Indian Institute of Technology Madras. He has done pioneering work in the area of deep sea technologies in India and spearheaded many indigenization programmes like Autonomous underwater profiers, drifters, technologies for the extraction of Polymetallic Nodules from deep sea. He has published 90 papers including International Journals, International conferences, National Conference and others. He received IEEE OES Presidential Award, National Geoscience award and ISOPE Ocean Mining Symposium award. He is the founder Chairman of IEEE Oceanic Engineering Society of India, Chair of IEEE Madras Chapter and Associate Editor of IEEE Journal.