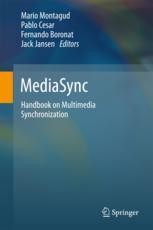 This book provides an approachable overview of the most recent advances in the fascinating field of media synchronization (mediasync), gathering contributions from the most representative and influential experts. Understanding the challenges of this field in the current multi-sensory, multi-device, and multi-protocol world is not an easy task. The book revisits the foundations of mediasync, including theoretical frameworks and models, highlights ongoing research efforts, like hybrid broadband broadcast (HBB) delivery and users’ perception modeling (i.e., Quality of Experience or QoE), and paves the way for the future (e.g., towards the deployment of multi-sensory and ultra-realistic experiences).

Although many advances around mediasync have been devised and deployed, this area of research is getting renewed attention to overcome remaining challenges in the next-generation (heterogeneous and ubiquitous) media ecosystem. Given the significant advances in this research area, its current relevance and the multiple disciplines it involves, the availability of a reference book on mediasync becomes necessary. This book fills the gap in this context. In particular, it addresses key aspects and reviews the most relevant contributions within the mediasync research space, from different perspectives.

Mediasync: Handbook on Multimedia Synchronization is the perfect companion for scholars and practitioners that want to acquire strong knowledge about this research area, and also approach the challenges behind ensuring the best mediated experiences, by providing the adequate synchronization between the media elements that constitute these experiences.

Pablo Cesar leads the Distributed and Interactive Systems Group at Centrum Wiskunde & Informatica (CWI), Amsterdam. He is involved in standardization activities, such as W3C, The Moving Picture Experts Group, and International Telecommunication Union, and has been active in a number of European projects. He has co-authored over 100 articles (conference papers and journal articles) about multimedia and immersive systems, human-centered multimedia, QoE and social media sharing. Contact him at p.s.cesar@cwi.nl or http://homepages.cwi.nl/~garcia

Fernando  Boronat  studied  Telecommunications  Engineering  at  the  Polytechnic University  of  Valencia  (UPV)  in  Spain.  After  working  for  several  Spanish  Telecommunication Companies,  in  1996  he  moved  back  to  the  UPV,  where  he  is  an  Assistant  Professor  in  the Communications  Department  and  leads  the  Immersive  Interactive  Media  R&D  Group.  He  has extensive  experience  in  research  and  both  undergraduate  and  postgraduate  teaching  in Communication     Networks,     Multimedia     Systems,     Multimedia    Protocols     and Media Synchronization. He has co-authored several educational books and papers and over 90 research papers in relevant journals and conferences.  He is an IEEE and ACM member and is involved in several private and public research projects and standardization activities. He is also a member of IPCs national and international journals and conferences. Contact him at fboronat@dcom.upv.es or http://iim.webs.upv.es

Jack Jansen is a researcher at Centrum voor Wiskunde en Informatica (CWI), Amsterdam. Over the years his areas of interest have gone from computer networks, to distributed systems, to computer languages, to multimedia documents and synchronization, to sensor networks and internet of things. He has co-authored over 40 articles, as well as contributed to standardization activities and large open source projects in variations of these fields. Contact him at Jack.Jansen@cwi.nl  or http://homepages.cwi.nl/~jack.