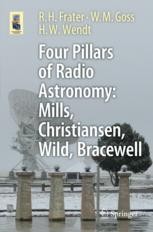 This is the story of Bernie Mills, Chris Christiansen, Paul Wild and Ron Bracewell, members of a team of radio astronomers that would lead Australia, and the world, into this new field of research. Each of the four is remembered for his remarkable work: Mills for the development the cross type instrument that now bears his name; Christiansen for the application of rotational synthesis techniques; Wild for the masterful joining of observations and theory to elicit the nature of the solar atmosphere; Bracewell for his contribution to imaging theory. As well, these Four Pillars are remembered for creating a remarkable environment for scientific discovery and for influencing the careers of future generations. Their pursuit of basic science helped pave the way for technological developments in areas ranging from Wi-Fi to sonar to medical imaging to air navigation, and for underpinning the foundations of modern cosmology and astrophysics.

Robert H. (Bob) Frater has researched electronics, telecommunications, radioastronomy instrumentation, electroacoustics and biomedical devices for over 40 years. He was responsible for ground-breaking techniques in instrumentation and systems for radioastronomy and optical astronomy and obtained funding for and directed the construction of the Australia Telescope at Narrabri, NSW. In the 1980s and 90s, he played critical roles in CSIRO (Commonwealth Scientific and Industrial Research Organisation) as a science administrator. He currently holds several consulting and Board positions. Bob Frater has been awarded many honours including the Australian Centenary Medal, the IEEE Centennial Medal, the Norman W. V. Hayes Medal and Officer of the Order of Australia.

W. Miller Goss received his undergraduate degree in astronomy from Harvard in 1963 and a PhD from the University of California (Berkeley) in 1967 while working on the newly discovered OH radio frequency line at the Hat Creek Observatory. He then moved to Australia to the CSIRO Division of Radiophysics, first as a postdoctoral fellow and later as a staff member. In 1976, he was the recipient of the Pawsey Medal of the Australian Academy of Science. From 1977 to 1986, he was on the staff of the Kapteyn Astronomical Institute of the University of Groningen, the Netherlands, and then professor from 1980 to 1986. In 1986, he moved to the National Radio Astronomy Observatory (NRAO) in Socorro, New Mexico, (USA). He was director of the Very Large Array and the Very Long Baseline Array from 1988 to 2002. He published Under the Radar, the First Woman in Radio Astronomy: Ruby Payne-Scott in 2009, and in 2013, a popular version of this book was published by Springer in the Astronomers’ Universe series: Making Waves, The Story of Ruby Payne-Scott, Australian Pioneer Radio Astronomer. At present, W.M. Goss, Ron Ekers and Claire Hooker are working on a biography of J.L. Pawsey, From the Sun to the Cosmos, Joseph Lade Pawsey, Founder of Australian Astronomy. W.M. Goss's scientific interests include radio astronomical studies of the interstellar medium in the Milky Way and nearby galaxies. He is an emeritus astronomer at the NRAO and the author of over 550 astronomical publications.

Harry Wendt completed a PhD in the history of radio astronomy in 2008. He retired from full time work in 2017 after a 28-year career in banking, including time as Chief Technology Officer and General Manager of Digital for Westpac Banking Corporation in Australia. Prior to this he worked in the computer industry and spent eight years as an aircrew officer in the Royal Australian Navy Fleet Air Arm.  It was while learning to navigate using a sextant that his interest in astronomy was first kindled.  He lives in Sydney, Australia, and is a keen surfer and sailor.

“The book tells a highly readable story of four scientists/engineers who contributed to the development and high international standing of radio astronomy in Australia. … The book is abundantly filled with original photos and illustrations. I can recommend it to all radio astronomers that are old enough to have personally known the Four Pillars. It will be a good read to anyone with an interest in the development of science in post-war Australia … .” (Jacob W. M. Baars, The Radio Science Bulletin, Issue 365, June, 2018)