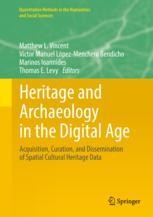 Heritage and Archaeology in the Digital Age

This book examines how computer-based programs can be used to acquire ‘big’ digital cultural heritage data, curate, and disseminate it over the Internet and in 3D visualization platforms with the ultimate goal of creating long-lasting “digital heritage repositories.’ The organization of the book reflects the essence of new technologies applied to cultural heritage and archaeology. Each of these stages bring their own challenges and considerations that need to be dealt with. The authors in each section present case studies and overviews of how each of these aspects might be dealt with. While technology is rapidly changing, the principles laid out in these chapters should serve as a guide for many years to come. The influence of the digital world on archaeology and cultural heritage will continue to shape these disciplines as advances in these technologies facilitate new lines of research.

serif">The book is divided into three sections covering acquisition, curation, and dissemination (the major life cycles of cultural heritage data). Acquisition is one of the fundamental challenges for practitioners in heritage and archaeology, and the chapters in this section provide a template that highlights the principles for present and future work that will provide sustainable models for digital documentation. Following acquisition, the next section highlights how equally important curation is as the future of digital documentation depends on it. Preservation of digital data requires preservation that can guarantee a future for generations to come. The final section focuses on dissemination as it is what pushes the data beyond the shelves of storage and allows the public to experience the past through these new technologies, but also opens new lines of investigation by giving access to these data to researchers around the globe. Digital technology promises significant changes in how we approach social sciences, cultural heritage, and archaeology. However, researchers must consider not only the acquisition and curation, but also the dissemination of these data to their colleagues and the public.

Throughout the book, many of the authors have highlighted the usefulness of Structure from Motion (SfM) work for cultural heritage documentation; others the utility and excitement of crowdsourcing as a ‘citizen scientist’ tool to engage not only trained students and researchers, but also the public in the cyber-archaeology endeavor.  Both innovative tools facilitate the curation of digital cultural heritage and its dissemination.   Together with all the chapters in this volume, the authors will help archaeologists, researchers interested in the digital humanities and scholars who focus on digital cultural heritage to assess where the field is and where it is going.

Matthew L. Vincent received his PhD in Anthropology at the University of California San Diego. He is currently a part of digitalMED at University of Murcia. His research expertise includes landscape archaeology, virtual environments, geographic information systems, cultural heritage, and digital libraries. He has been involved with Tall al-'Umayri, an archaeological project in southwest Amman, exploring the central Jordanian plateau’s occupation in antiquity.

Victor Manuel López-Menchero Bendicho has a PhD in archeology. His research in recent years has focused on the integrated management of archaeological and cultural heritage. His interests in national and international conferences are dozens. He has acted as secretary and director of various lectures and courses, highlighting the six editions of the International Congress on Graphic Archaeology and Informatics, Cultural Heritage and Innovation (ARQUEOLOGICA 2.0).  He is co-editor of the Spanish version of the London Charter and coordinator of the Principles of Sevilla (International Principles of Virtual Archaeology). He is also co-director along with Alfredo Great of the international scientific journal Virtual Archaeology Review (VAR). He is the author of more than twenty scientific publications, among which "The musealization archaeological heritage site: the Spanish case in the European context" (2013, Archaeopress Publishers of British Archaeological Reports, Oxford). He has worked on numerous projects for international research, highlighting their participation in the projects of its Tekna (Morocco) (2008-2009, 2011-2012, 2013-2014) funded by the Ministry of Culture and the Spanish Agency for International Cooperation Development, the Network of Excellence "Virtual Museum Transnational Network" (2011-2015) funded by the European Union under the 7th Framework Programme (FP7-ICT-2009-6) or the Initial Training Network for Digital Cultural Heritage: Projecting our Past to the Future (2013-2017) funded by the European Union under the 7th Framework Programme (FP7-PEOPLE-2013-ITN). He is currently the vice president of the Spanish Society of Virtual Archaeology (ESTA), and member of the Center for the Study of Virtual Archaeology at the University of Murcia.

Marinos Ioannides studied computer science at the University of Stuttgart in Germany where he finished his master's degree in the main European research laboratory Hewlett-Packard's safety complex banking information. He continued his studies in mechanical engineering and automation and completed his doctoral thesis with honors at the University itself. The final software that was developed during the thesis found with 107 licenses (software licenses) to popular universities and research centers on five continents. He has worked both in the academia and in managerial positions in industry for more than 20 years, culminating in the award from IBM in 1993 as the best young researcher in Germany and the European Commission in 1995 for his repatriation to Cyprus with five-KIT-204 Surfmod plan how 75 KECU. From 1994 until the completion of the work of the Higher Technical Institute was a member of the academic staff of the IT industry and responsible for all research work in the industry. In 1995 he created and was administrative and scientific head of the Graphic and multimedia applications ATI. Since 2011 among academic staff of the Technological University of Cyprus in Limassol. To 2010 the European and Hispanic Link Virtual Archaeology Tartezos awarded him the prize for his work and contribution to the field of digitization of cultural heritage. He is author of the book 3D Research Challenges in Cultural Heritage and author tiw populated edition of the Digital Heritage Springer Verlag. He has participated in more than thirty of the EU research programs in the last 20 years by an administrative or research role. From 2007 to 2010 has been actively assist in the establishment of the research center in Archaeology at the Institute of Cyprus (Science and Technology in Archeology Research Center STARC) and was included in the research staff after special permission of the Minister of Finance and Minister of Labour. Since January 2012 it has assumed full responsibility for the establishment and administration of the research center in the digitization of cultural heritage in Cyprus University of Technology. Since 2013 he is coordinator of the larger European research project CUT and the EU (Marie Curie Initial Training Network on Digital Cultural Heritage: www.itn-dch.eu) on Digital Cultural Heritage. The program has as its ultimate goal of training 16 doctoral researchers and fourth postdoctoral researchers in innovative modern methods of documentation and promotion of cultural heritage.

Thomas E. Levy is Distinguished Professor and holds the Norma Kershaw Chair in the Archaeology of Ancient Israel and Neighboring Lands at the University of California, San Diego. He is a member of the Department of Anthropology and Judaic Studies Program and leads the Cyber-archaeology research group at the Qualcomm Institute, California Center of Telecommunications and Information Technology (Calit2). Elected to the American Academy of Arts and Sciences, Levy is a Levantine field archaeologist with interests in the role of technology, especially early mining and metallurgy, on social evolution from the beginnings of sedentism and the domestication of plants and animals in the Pre-Pottery Neolithic period (ca. 7500 BCE) to the rise of the first historic Levantine state level societies in the Iron Age (ca. 1200 – 500 BCE). A Fellow of the Explorers Club, Levy won the 2011 Lowell Thomas Award for “Exploring the World’s Greatest Mysteries.” Levy has been the principal investigator of many interdisciplinary archaeological field projects in Israel and Jordan that have been funded by the National Geographic Society, the National Endowment for the Humanities, National Science Foundation and other organizations. Tom also conducts ethnoarchaeological research in India. Levy, his wife Alina Levy and the Sthapathy traditional craftsmen from the village of Swamimalai co-authored the book Masters of Fire - Hereditary Bronze Casters of South India. Bochum: German Mining Museum, 2008). Tom has published 10 books and several hundred scholarly articles. Levy’s most recent book is entitled Historical Biblical Archaeology – The New Pragmatism (London: Equinox Publishers, 2010 that in 2011 won the ‘best scholarly book’ from Biblical Archaeology Society (Washington, DC). Levy and his colleague Mohammad Najjar recently won Biblical Archaeology Review’s ‘Best BAR Article’ for “Condemned to the Mines: Copper Production & Christian Persecution.”
Show all