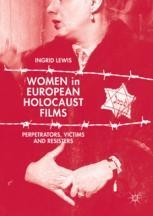 This book considers how women’s experiences have been treated in films dealing with Nazi persecution. Focusing on fiction films made in Europe between 1945 and the present, this study explores dominant discourses on and cinematic representation of women as perpetrators, victims and resisters. Ingrid Lewis contends that European Holocaust Cinema underwent a rich and complex trajectory of change with regard to the representation of women. This change both reflects and responds to key socio-cultural developments in the intervening decades as well as to new directions in cinema, historical research and politics of remembrance. The book will appeal to international scholars, students and educators within the fields of Holocaust Studies, Film Studies, European Cinema and Women’s Studies.

Dr Ingrid Lewis is Assistant Lecturer in Film and Theatre Studies at Dundalk Institute of Technology, Ireland. She is author of the book chapter ‘Ordinary Women’ as Perpetrators in European Holocaust Films (Palgrave Macmillan, 2015) and has taught within the discipline of Film Studies at Universities in Croatia, Ireland and Italy.

“An impressive and overdue entry into Holocaust Studies literature. Lewis’ monograph interweaves the empirical and theoretical literature on women’s history,Nazi Germany and the Holocaust, with hundreds of films on these topics. This original book calls out the perpetual stereotyping that has obscured our knowledge and understanding of how women perpetrated and experienced the Holocaust.” (Wendy Lower, Professor of History, Claremont McKenna College, USA, author of Hitler’s Furies: German Women in the Nazi Killing Fields, 2013)

“This book fills a much-needed gap in the scholarship on Holocaust cinema. Recognition that the Holocaust was indeed “gendered” has come to inform contemporary Holocaust historiography, but Ingrid Lewis has provided the first in-depth analysis of the representation and construction of female experience in Holocaust film. Demonstrable expertise, clarity of writing, breadth of coverage and sophistication of approach are all notable features of this excellent and important study.” (Barry Langford, Professor of Film Studies, Royal Holloway, University of London, UK, co-author of Teaching Holocaust Literature and Film, 2017)

“This book gives a fascinating and invaluable account of over 300 films, and traces the ways in which the representation of women in European Holocaust cinema - as victims, perpetrators and resisters - has changed since the post-war era. Ingrid Lewis maintains a balance throughout between detailed filmic analysis and commentary on wider trends, placing celebrated films such as Kapò and The Reader alongside lesser-known examples, to very convincing effect.” (Sue Vice, Professor of English Literature, University of Sheffield, UK, author of Holocaust Fiction, 2000)

“Bridging the divide between gender and the Holocaust, this is a necessary book that brings sharply into focus the experiences of women as portrayed in a vast body of filmic work released from 1945 to date. In its impressive breadth, it provides a formidable and discerning overview that profoundly alters our understanding of the forms and evolution of the representation of women and their roles—as perpetrators, victims and resisters—in European Holocaust cinema.” (Laura Rascaroli, Professor of Film and Screen Media, University College Cork, Ireland, author of How the Essay Film Thinks, 2017)

“Ingrid Lewis endeavours to investigate the representation of women across a considerably diverse range of European Holocaust films, deftly exposing the marginalisation of women in the genre with great skill. Mapping the complex and often problematic ways in which women are conveyed as victims, perpetrators, and resisters, Lewis' excellent research and exceptional writing make her work a compelling addition to the growing literature on women's experiences during the Holocaust.” (Adam Brown, Senior Lecturer in Digital Media at Deakin University, Australia, author of Judging ‘Privileged’ Jews: Holocaust Ethics, Representation, and the ‘Grey Zone’, 2015)