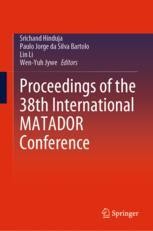 This book presents 77 refereed papers given at the 38th Matador Conference held at National Formosa University, Taiwan in March 2015. The MATADOR series of conferences covers the topics of manufacturing automation and systems technology, applications, design, organisation and management, and research.

These proceedings include original papers contributed by researchers from around the globe, covering the principles, techniques and applications in the aerospace, automotive, biomedical, energy, consumable goods and process industries.

• Micro/nano fabrication and applications, including graphene and 2D materials

Srichand Hinduja is a professor of Manufacturing Technology at the University of Manchester, UK. After graduating in Mechanical Engineering from Madras University in India, he worked in industry in Germany. He completed his MSc and PhD in machine tool technology at the University of Manchester Institute of Science and Technology (UMIST), UK where he was appointed as a lecturer in 1971 and as a professor in 1999. His research interests are in computational modeling of machine tool structures and manufacturing processes such as metal cutting, pressure die-casting, and electrochemical machining. His other interests are in the computer-aided process planning of machined components and automated inspection of turbine blades. He is a fellow of the Royal Academy of Engineering, International Academy of Production Engineering (CIRP), and Institute of Mechanical Engineering.

Prof. Wen-Yuh Jywe is a professor of Optical Precision Measurement, Machine Tool Calibration Measurement, and Precise Positioning Stage Design. He obtained his PhD from the University of Manchester Institute of Science and Technology (UMIST), UK in 1992. He has received several awards, including two National Invention Gold Awards from the Ministry of Economic Affairs (2004 and 2012), and Distinguished Academia-industry Collaboration Award from the Ministry of Science and Technology (2014), The Academia-industry contribution Award for machinery industry from Association of Machinery Industry (2016), and a Research Award from the Machine Tool Engineering Foundation in Japan (2016). He was the dean of Engineering College, the chairman of Department of Automation Engineering, and the president for Research and Development of the National Formosa University. Since 2013, he has been the president of National Formosa University.