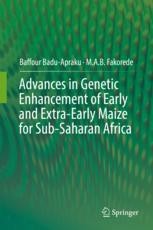 The book focuses on the principles and practices of tropical maize improvement with special emphasis on early and extra-early maize to feed the increasing population in Sub-Saharan Africa. It highlights the similarities and differences between results obtained in temperate regions of the world and WCA in terms of corroboration or refutation of genetic principles and theory of maize breeding.  The book is expected to be of great interest to maize breeders, advanced undergraduates, graduate students, professors and research scientists in the national and international research institutes all over the world, particularly Sub-Saharan Africa. It will also serve as a useful reference for agricultural extension and technology transfer systems, Non-governmental Organizations (NGOs) and Community-Based Organizations (CBOs), seed companies and community-based seed enterprises, policy makers, and all those who are interested in generating wealth from agriculture and alleviating hunger and poverty in Sub-Saharan Africa.

Dr. Baffour Badu-Apraku is a Principal Scientist, Maize Breeder and Quantitative Geneticist at the International Institute of Tropical Agriculture (IITA). He has over thirty years of experience in agricultural research, development, and management in West and Central Africa. His major areas of focus include breeding, testing, and promotion of technology transfer especially the adoption of open-pollinated and hybrid varieties of normal endosperm maize, Quality Protein Maize, Pro-vitamin A and sustainable agronomic practices as well as seed production. Through his maize breeding program at IITA, several Striga-resistant, low soil nitrogen and drought-tolerant early and extra-early populations have been developed and are serving as invaluable sources of varieties and inbred lines for breeders of the sub region. Over the years, many early and extra-early Striga, drought and low soil nitrogen-tolerant varieties and hybrids have been developed in his program, formally released, and widely adopted by farmers in the sub region. The availability of the early and extra-early varieties and hybrids have created niches for maize production, consumption and improved food security in WCA.

Dr. M.A.B. Fakorede is a Professor at the Crop Production and Protection Department of Obafemi Awolowo University, Nigeria. He obtained his B.S. (Agric.) from the University of Ife (now Obafemi Awolowo University) in 1971, and M.S. (1975) and Ph.D (1977) from Iowa State University, USA.  He is a Specialist in Plant Breeding, Quantitative Genetics, and Seed Production, with a strong minor in Agroclimatology. He has over 40 years of research and teaching experience and has served as Collaborating Scientist at IITA as well as Consultant and Training Resource Person in several international agricultural research centers. In collaboration with maize breeders in Nigeria and IITA, he has released several open-pollinated varieties, inbred lines and hybrids. He has mentored well over 120 undergraduate and graduate students in their research theses, some of who are now professors and outstanding researchers. He is a member of many international professional societies and has served as a member of the Editorial Board of several international journals in the field of Genetics and Plant Breeding. He has many publications to his credit and is also the Founding President of the African Society of Agronomy, Crop, Soil & Environmental Sciences (ASACSES).