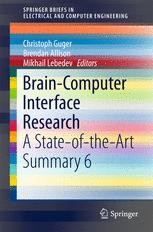 This book presents compact and informative descriptions of the most promising new projects in brain-computer interface (BCI) research. As in earlier volumes in this series, the contributions come from many of the best-known groups in BCI research. Each of these chapters provides an overview of a project that was nominated for the most prestigious award in the BCI community: the Annual BCI Research Award. The book also contains an introduction and discussion with a review of major trends reflected in the awards. This volume also introduces a new type of contribution, namely a chapter"Trends in BCI Research" that summarizes a top trend in the BCI research community. This year's "Trends in BCI Research" addresses BCI technology to help patients with disorders of consciousness (DOC) and related conditions, including new work that goes beyond communication to diagnosis and even prediction.

Dr. Brendan Allison studied Cognitive Science at the University of California in San Diego (Prof. Pineda) and received his PhD in 2003. He then worked as a postdoc or senior postdoc for several top experts, including Profs. Polich, Wolpaw, Pfurtscheller, and Neuper. He has been active in BCI research for about 20 years, with an h-index of 31.

Dr. Mikhail A. Lebedev is a senior research scientist at Duke University. He received a MSc from the Moscow Institute of Physics and Technology, Moscow in 1986 and a Ph.D. from the University of Tennessee, Memphis in 1995. He worked at the Institute for the Problems of Information Transm

ission, Moscow, (1986–1991), the International School for Advanced Studies, Trieste (1995–1997) and the National Institute of Mental Health (1997–2002). His main scientific interests are neurophysiology and brain–machine interfaces.