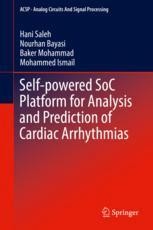 Self-powered SoC Platform for Analysis and Prediction of Cardiac Arrhythmias

This book presents techniques necessary to predict cardiac arrhythmias, long before they occur, based on minimal ECG data. The authors describe the key information needed for automated ECG signal processing, including ECG signal pre-processing, feature extraction and classification. The adaptive and novel ECG processing techniques introduced in this book are highly effective and suitable for real-time implementation on ASICs.

Nourhan Bayasi (M’13) received the B.S. degree in electrical and computer engineering from the Khalifa University of Science, Technology and Research, Abu Dhabi, United Arab Emirates, in 2013, where she is currently pursuing the M.S. degree in electrical and computer engineering. Her research project focuses on system-on-chip design and implementation of a fully integrated wearable biomedical system. Her current research interests include designing analog and mixed-signals integrated circuits, low power circuit design, and digital signal processing and its application.

Baker Mohammad (M’04–SM’13) received the B.S. degree from the University of New Mexico, Albuquerque, NM, USA, the M.S. degree from Arizona State University, Tempe, AZ, USA, and the Ph.D. degree from the University of Texas at Austin, Austin, TX, USA, in 2008, all in electrical and computer engineering. He was a Senior Staff Engineer and the Manager with Qualcomm, Austin, where he was involved in designing high performance and low power DSP processor used for communication and multimedia application. He was involved in a wide range of microprocessors design with Intel Corporation, Santa Clara, CA, USA, from high performance, server chips >100 W (IA-64), to mobile embedded processor low power sub-1 W (xscale). He has over 16 years of industrial experience in microprocessor design with an emphasis on memory, low power circuit, and physical design. He is currently an Associate Professor of Electronic Engineering with the Khalifa University of Science, Technology and Research, Abu Dhabi, United Arab Emirates, and a Consultant with Qualcomm Inc., San Diego, CA, USA. In addition, he is involved in microwatt range computing platform for WSN focusing on energy harvesting and power management, including efficient dc/dc and ac/dc converters. He holds ten issued U.S. patents and has several pending patent applications. He has authored one book entitled Embedded Memory Design for Multi-Core and SoC and co-authored several publications in digital system design, memory design and testing, energy harvesting, power management, and power conversion, in addition to emerging memory technology modeling and design. His current research interests include power efficient computing, high yield embedded memory, and emerging technology, such as memristor, STTRAM, and computer architecture.</p>

Mohammed Ismail a prolific author and entrepreneur in the field of chip design and test, spent over 25 years in academia and industry in the US and Europe .He obtained his BS and MS from Cairo University, Egypt and His PhD from the University of Manitoba, Canada in 1983, all in electrical engineering.

He is the Founder of the Ohio State University's (OSU) Analog VLSI Lab, one of the foremost research entities in the field of analog, mixed signal and RF integrated circuits and served as its Director. He also served on the Faculty of OSU's ElectroScience Lab. He held a Research Chair at the Swedish Royal Institute of Technology (KTH) where he founded the RaMSiS (Radio and Mixed Signal Integrated Systems) Research Group there. He had visiting appointments in Finland (Aalto university), Norway (NTH and University of Oslo), the Netherlands (Twente University) and Japan (Tokyo Institute of Technology).

He Joined KUSTAR, the UAE in 2011, where he held the ATIC (now Mubadala Technology) Professor Chair and is Founding Chair of the ECE Department. He is the Founding Director of the Khalifa Semiconductor Research Center

(KSRC) and Co-Director of the ATIC-SRC  Center of Excellence on Energy Efficient Electronic systems (ACE4S) targeting self-powered chip sets for wireless sensing and monitoring, bio chips and power management solutions. He recently joined Wayne State University, Detroit, Michigan as Professor and Chair of the ECE Department. He maintained a  an appointment with KUSTAR as an Adjunct professor. His current research focuses on "self- healing" design techniques for CMOS RF and mm-wave ICs in deep nanometer nodes, energy harvesting and power management, wearable Biochips hardware security, and SoCs for IoTs.

Dr.Ismail served as a Corporate Consultant to over 30 companies and is a Co-Founder of Micrys Inc., Columbus, Ohio, Spirea AB, Stockholm, Firstpass Technologies Inc., Dublin, Ohio and ANACAD-Egypt (now part of Mentor Graphics/Siemens).

He advised the work of over 50 Ph.D. students and of over 100 M.S. students. He authored or co-authored over 20 books and over 170 journal publications, 300 conference papers and has 14 US patents issued and several pending.

He is the Founding Editor of the Springer Journal of Analog Integrated Circuits and Signal Processing and serves as the Journal's Editor-in-Chief. He served the IEEE in many editorial and administrative capacities. He is the Founder of the IEEE International Conference on Electronics, Circuits and Systems (ICECS), the flagship Region 8 Conference of the IEEE Circuits and Systems Society and a Co-Founder of the IEEE International Symposium on Quality Electronic Design (ISQED). He received the US Presidential Young Investigator Award, the Ohio State Lumley Research Award four times, in 1992, 1997, 2002 and 2007, IEEE 2016 CAS Society best paper award and the US Semiconductor Research Corporation's Inventor Recognition Award twice. He is a Fellow of IEEE.