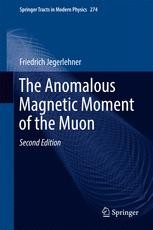 The Anomalous Magnetic Moment of the Muon

This research monograph covers extensively the theory of the muon anomalous magnetic moment and provides estimates of the theoretical uncertainties. The muon anomalous magnetic moment is one of the most precisely measured quantities in elementary particle physics and provides one of the most stringent tests of relativistic quantum field theory as a fundamental theoretical framework. It allows for an extremely precise check of the standard model of elementary particles and of its limitations. This book reviews the present state of knowledge of the anomalous magnetic moment a=(g-2)/2 of the muon. Recent experiments at the Brookhaven National Laboratory now reach the unbelievable precision of 0.5 parts per million, improving the accuracy of previous g-2 experiments at CERN by a factor of 14. In addition, quantum electrodynamics and electroweak and hadronic effects are reviewed. Since non-perturbative hadronic effects play a key role for the precision test, their evaluation is described in detail. Perspectives for future improvements of the theoretical and experimental precision are considered. The new edition features improved theoretical predictions to match upcoming experiments, like the one at Fermilab. Additionally the new more precise basic parameters are presented.

Prof. Dr. Jegerlehner studied physics and received his PhD at Bern University, Switzerland. In 1976 he obtained his Habilitation at Free University of Berlin, Germany.

He had been member of the research project Quantumdynamics at the Center of Interdisciplinary Research (ZIF), Bielefeld University. Since 1983 full professor of Theoretical Physics at the University of Bielefeld. 1989-1995 staff at Paul-Scherrer-Institute, Villigen, Switzerland, with teaching position at ETH Zürich and ETH Lausanne, Switzerland. Since 1995 head of the DESY Zeuthen theory group and professor at Humboldt-University Berlin.

In 2007 he received a Research Grant Institute of Nuclear Physics of the Polish Academy of Sciences, Krakow/Poland and had been awarded in 2008 the Alexander von Humboldt Honorary Research Fellowship by the Polish Science Foundation University Katowice, Poland.
Show all