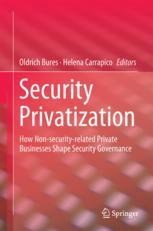 This book widens the current debate on security privatization by examining how and why an increasing number of private actors beyond private military and security companies (PMSCs) have come to perform various security related functions. While PMSCs provide security for profit, most other private sector stakeholders make a profit by selling goods and services that were not originally connected with security in the traditional sense. However, due to the continuous introduction of new legal and technical regulations by public authorities, many non-security-related private businesses now have to perform at least some security functions.

This volume offers new insights into security practices of non-security-related private businesses and their impact on security governance. The contributions extend beyond the conceptual and theoretical arguments in the existing body of literature to offer a range of original case studies on the specific roles of non-security-related private companies of all sizes, from all areas of business and from different geographic regions.

Associate Professor Oldrich Bures is the Head of the Department of International Relations and European Studies and the Center of Security Studies, both at Metropolitan University Prague. He was previously a senior lecturer at Palacky University, a Fulbright Fellow at the Joan. B. Kroc Institute, University of Notre Dame; an External Research Fellow at the Centre for European Security, School of English, Sociology, Politics & Contemporary History, University of Salford; and Marie-Curie COFUND Senior Research Fellow at the Institute of Health, Risk and Resilience at Durham University. His research is focused in the areas privatization of security and the EU counterterrorism policy. He was awarded several external research grants, including three multiple-institutions grants by the Czech Science Foundation. His work has been published in Security Dialogue, Cooperation and Conflict, Terrorism and Political Violence, Studies in Conflict and Terrorism, International Studies Review, and Intelligence and National Security among other key journals. He is the author of several monographs, including EU Counterterrorism Policy: A Paper Tiger? (Ashgate, 2011) and Private Security Companies: Transforming Politics and Security in the Czech Republic (Palgrave Macmillan, 2015), and (co-)editor of several edited volumes, including A Decade of EU Counter-Terrorism and Intelligence: A Critical Assessment (Routledge 2016).

Helena Carrapico is a Senior Lecturer in Politics and International Relations at Aston University and she is a co- Director for the Aston Centre for Europe and its Jean Monnet Centre of Excellence. Her research focuses on European internal security, in particular EU organised crime. She holds a doctoral degree in Social and Political Sciences from the European University Institute, where she developed her thesis on the securitization of organised crime. She has considerable experience publishing on this topic in journals such as the Journal of Common Market Studies, European Foreign Affairs Review, Crime, Law and Social Change, European Security, and Global Crime. She is also co-editor of several edited volumes including EU Borders and Shifting Internal Security: Technology, Externalization and Accountability, published with Springer. She has attracted research funding from the European Commission, the Economic and Social Research Council, the British Academy, and the Royal Society. She also has a track record of engagement with policy making in this field, having advised the United Kingdom and Portuguese Governments in matters relating to their organised crime strategies.