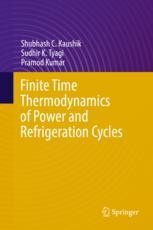 This book addresses the concept and applications of Finite Time Thermodynamics to various thermal energy conversion systems including heat engines, heat pumps, and refrigeration and air-conditioning systems. The book is the first of its kind, presenting detailed analytical formulations for the design and optimisation of various power producing and cooling cycles including but not limited to:

Further, the book addresses the thermoeconomic analysis for the optimisation of thermal cycles, an important field of study in the present age and which is characterised by multi-objective optimization regarding energy, ecology, the environment and economics. Lastly, the book provides the readers with key techniques associated with Finite Time Thermodynamics, allowing them to understand the relevance of irreversibilities associated with real processes and the scientific reasons for deviations from ideal performance. The book is aimed at a broad readership, and offers a valuable reference book for graduate students, scholars and professionals working in the areas of thermal science and engineering.

Prof. S.C. Kaushik received his Ph.D. in Plasma Science from IIT Delhi after his distinguished First Position in Master’s degree in electronics. His research fields include the activities in Plasma Science and Thermal Science and Engineering; Energy Conservation and Heat Recovery; Solar Refrigeration and Airconditioning; Solar Architecture; and Thermal Storage and Power Generation. He has made significant contributions in these fields as evident by his more than 400 research publications in Journals/Conferences of repute at national and international levels. Dr. Kaushik has also completed several sponsored and consultancy projects from various government and private agencies. He has guided 50 Ph.D. Thesis and 75 M.Tech projects and has authored several books. Dr. Kaushik has also been the Postdoctoral Fellow at Queensland University, Brisbane, Australia, Visiting Professor at LES-IIM-UNAM, Mexico and Madam Curie Visiting Fellow of European Commission, Paris, France. Prof. S.C. Kaushik has recently been coveted with Top Academic Research Performer (First Rank Holder) on all India level in the subject area of Energy for the last 5–10 years research publications citations and H-index basis as per Scopus data reported in NSTMIS-DST(GOI), New Delhi (2015).

Dr. S.K. Tyagi is working as Associate Professor at Centre for Energy Studies, I.I.T. Delhi and earlier he was working as Director/Scientist E at Sardar Swaran Singh National Institute of Renewable Energy, Kapurthala, an autonomous institution of the Ministry of New and Renewable Energy, Government of India. He has also worked as Assistant Professor at SMVDU, Katra, Jammu & Kashmir. Dr. Tyagi has worked as Invited Scientist at Korea Institute of Energy Research, South Korea and as Post Doctoral Fellow at The Hong Kong Polytechnic University, Hong Kong, Zhejiang University, Hangzhou and Xiamen University, Xiamen, China during 2002–2008. He has made a significant contribution in R&D activities as evident by more than 150 publications in Journals/Conferences of repute. He has guided five Ph.D. Theses and 10 M.Tech. projects.

Dr. Pramod Kumar received Ph.D. degree in the research field of Finite Time Thermodynamics from IIT Delhi in 2003 and continued research work as Post Doctoral Fellow at IIT Delhi in research field of Exergy Analysis. He had earlier completed M.Sc. in Physics, with specialization in Electronics from Meerut University in 1997 and also qualified GATE-98 in Physics and Joint CSIR-UGC NET examination-Dec. 2002 in Physical Sciences. His research areas include Finite Time Thermodynamics, Refrigeration and Airconditioning Systems, Energy and Exergy Analysis. Dr. Kumar joine

d Defence Research and Development Organisation (DRDO), Ministry of Defence, directly as Scientist ‘C’ in 2005 at Naval College of Engineering, I.N.S. Shivaji, Lonavala, Pune and taught at undergraduate level for about four years. In Aug. 2008, he joined Solid State Physics Laboratory (SSPL) Delhi and is currently working as Scientist E. He has received Commanding-in-Chief (C-in-C) Award–Commendation by Vice Admiral, Indian Navy for his specific teaching ability. He has also received Technology Group Award three times for his contribution at SSPL Delhi. He is a life member of Solar Energy Society of India. He has made a significant contribution in R&D activities as evident by more than 25 research publications in Journals/Conferences of repute at national and international levels. He has also contributed towards completion of four R&D projects, five technical reports and guided couple of students at M.Tech/B.Tech level. He is expert reviewer in many national/international journals of repute.
Show all